Dannifer.
Let me get this straight. Jenn quit her job multiple times without a thought for how she’d pay the bills at the fancy boarding school her neglected son JJ attended. JJ’s father passed away and he didn’t return for the memorial (such as it was, got into trouble trying to help pay for that vintage 90s apparel by using the proceeds from weed sales, got booted out of school, and then returned home only to encounter his mother making out with some surfer dude on Alice’s sofa. No wonder he’s acting out. He borrowed poor Daniel’s prized MP3 player only to destroy it by, what did he say? "I dropped it and a truck rolled over it, then a dog peed on it, and a bicycle rolled over it, and it fell into a puddle, and... and…and… all he says is, "Bummer?" Brat needs to use some of that hard earned cash from selling Mary Jane to buy Daniel a new MP3 player. Pronto.

Salem stereotypes are absurd. Those long- haired kids JJ wandered over to at the square were minding their own business, sipping pop. Were they supposed to be pot-heads? What is this 1960?

Jarlena divorce.
Finally, Marlena asked John if he wanted a divorce and then, likely because she’s been bottling up her pain, she also let him feel the back of her hand across his face. That slap should go down as one of the all-time greatest slaps in soaps. Even though we know John thinks he’s doing something noble by planning to have sex with his son’s fiancée - Ew- in order to break them up, this act isn’t exactly endearing him to us as much as if he was forced into it. The story would have had even more of an impact emotionally if John and Marlena were together when this all went down.

Will Marlena see the photo of Kristen paying off Sy before Kristen and John do the deed?!

EJ remarked that a Brady always blames a DiMera when anything happens in Salem. "That passes for police work." Touché.

Sami to Kate: "I can’t imagine anyone being stupid enough to get in bed with you."

Kate, "Really, because these two did!" Burn.

There’s still a month for you to Vote in the 7th Annual Sudzies Awards.

Read Matt’s DOOL Musings. A taste: "She found the fact of Rafe and Kate's coital coupling so hideous that she wore the ugliest clothes she could find to express the profundity of her disgust." 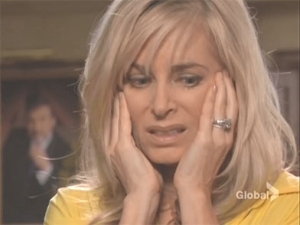 This week centered on Rafe’s assault, his injuries leaving him near death, his medically induced coma, and the Salemites automatically pointing the finger at others without the facts.

The crime:
In reality, we might let the police do their work but Salemites have the SPD. “Detective” Cracker Jack and Civilian Abraham found the FBI jacket on the ground next to Rafe’s body at the crime scene. Hope passed the jacket to some random cop who passed it to another, who took it around the block, shook it, banged it against the wall a few times, ran it through a wash cycle, and then bagged it. Then Tuesday, Abe disappeared from the scene. Maybe he was a mirage, much like the current SPD detectives.

As Matt said in his recap, “The pathos is overwhelming.”

The suspects.
Those involved with this storyline are pointing the finger at others without evidence because of their own animosity toward them. No surprise but this time it actually may be possible that neither Nick, Stefano, nor EJ had anything to do with this.

Could it be a prisoner that Rafe likely put behind bars? If it wasn’t for Ciara withholding that prisoner release notice, Rafe might not be where he is? Ouch. It’s difficult to blame a child, especially one who has parents who were kidnapped or stalkers for half her life but boy she needs to be sorted out.

What about Stefano? He was truly shocked when Kate revealed she and Rafe were lovers. Throwing his glass of Grappa at the fireplace after she left was also an indication that he had no idea and therefore, we deduce he has no motivation. Hmm, except that he is Stefano and loves playing with people’s lives.

Could it have been EJ who tried to murder Rafe? Obviously it was painful for him to listen to his own son go on about how much he loved and missed Rafe and wanted to live with him again. That’s a pretty good motivator and EJ’s certainly not above it but it felt too obvious. Then again, he’s been losing his touch as of late and he did share eye contact with Jensen and follow him into the lounge at the hospital. Sami obviously doesn’t trust him and Hope seems to think he’s behind the attack, hopefully not just because Rafe had that FBI jacket in his possession.

Sonny and Will fingered Nick for the crime because he’s a bigot who didn’t want his brother-in-law to know. They’re both Hortons – well Will is and Sonny’s close enough – so they’re used to pinning crimes on people if there’s bad blood. Don’t judge. That’s the Salem way. But Nick does have a history of violence and murder. And he did have a bag of muffins, much like the one the attacker stole from Rafe. Lastly, though Will and Sonny don’t know, Nick did have on the same blue shirt and black pants as whomever tried offing Rafe. Jensen? Could Rafe have hired him to kill Rafe and then later admired his handiwork while he stole the the muffin bag to give to Gabi? They need to find that bag and dust it.

Obviously Jensen’s our prisoner from the prisoner release notice and he knows Nick but what does he have against him? It looks like we’re about to find out what really happened to Nick in jail.

Vote! Who attempted to murder Rafe?

Lexi’s death anniversary.
Kayla and Abe’s scene in the square seemed to be filler until one of them mentioned in passing that this was around the anniversary of Lexi’s death. Nobody was expecting much but a little emotion and a few memories and a flashback would have gone a long way. Neither seemed too choked up. It’s almost better not to have any scene than to feel cheated.

Days of our Lives Spoiler Video: The Bottom Line