Soaps.com Says Goodbye to Days of our Lives’ John and Marlena! 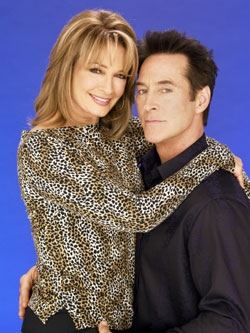 This Friday, January 23, John and Marlena will officially leave Salem. Whether fans agree or disagree with Days of Our Lives‘ controversial decision to axe the popular duo, there’s no denying the supercouple will be gone after Friday. Before that happens though, Soaps.com decided to take a walk down memory lane and share a couple highlights from their past with you.

They’ve been together since 1985 when John came to Salem wrapped in bandages. Even though Marlena thought he was Stefano DiMera at first, she later believed him to be her presumed dead husband, Roman Brady.

After they reunited, it was Marlena’s turn to be presumed dead after she was kidnapped by Orpheus. Roman, a.k.a. John, moved on to Diana Colville for a bit and then married Isabella Toscano. He eventually learned that he was not Roman Brady and began calling himself John Black.

Of course, Isabella died, Marlena and the real Roman returned, and John began a relationship with Kristen Blake. In the middle of all that, John and Marlena had an affair and Belle was conceived.

In addition, the ensuing years found John believing he was a priest, Marlena becoming possessed by the devil, John becoming brainwashed by Stefano, everyone believing Marlena was a serial killer, Marlena being presumed dead again, Melaswen, John becoming addicted to drugs, Marlena losing her memory, Alex North entering their lives, John being hit by a car and believed to be dead again and NuJohn.

Obviously that’s just a brief overview, as there were other nefarious obstacles the couple would have to overcome, most of which could be traced back to their decades long nemesis, Stefano DiMera. And heck, they even found time to get married more than once in between all that drama.

These days, John isn’t exactly the man Marlena married, considering he doesn’t have any memories of their life together, but they’re still fighting to get back to each other. As they inch closer to their exit date, it’s been promised that the two will in fact leave the show together as a happy couple. At least there’s that to console the fans!

To honor their last days on Days, we’ve found a few clips of the duo over the years. There were numerous moments to choose from, but here are a few that we at Soaps.com were particularly fond of.

John saves Marlena from possession.
Their 50’s themed date.
Their vow renewal.
John looks back on his life with Marlena.
John proposes.
Marlena says goodbye to a “dying” John.
John and Marlena steam things up in the tent.
Tune in this Friday to bid John and Marlena adieu (at least for now) and share your favorite moments of the couple with Soaps.com below.
And don’t forget to check out this Video Clip of what’s to come for John and Marlena this week.