Banus: Err. Well, at first she is like, "What? No, no, no." But basically what Gabi wants is to always see Rafe happy. That’s all she wants really. And for him to be safe and make decisions, and ultimately if he does that he’ll be happy. So there have been scenes where Gabi will ask why he doesn’t go back to Sami because she always made him happy. But when I find out that he is with Kate, it is very strange to me because first of all, she comes from a very dark place. She’s a DiMera, or was a DiMera, whatever the case may be. And she has been sly with us in the past, kind of devious with us. And I just tell him to be careful because of the person she is and he doesn’t need to be put in an even more difficult place. Don’t find the first rebound! But as time passes I start to warm up because Kate, she has done bad things in the past – just like Gabi. But it doesn’t mean she is a bad person. And we start to see that Kate really becomes involved with Gabi and the baby and she is there with Rafe all the time and she becomes very involved in our lives and I start to see that when she is in the room he gets a little happier. How could I say no to my brother’s happiness? It starts progressing into something positive.

Soaps.com: What do you see coming for Gabi, without giving too much away?

Soaps.com: We are all excited to see what’s in store for Gabi.

Banus: I am excited for everyone to see. Honestly, there are a lot of light moments that are going to come for Gabi. There have been a lot of heavy moments, but there is going to be a lot of light, beautiful moments too.

Soaps.com: We understand you work a lot with the American Foundation for Suicide Prevention. Why is this cause so important to you?

Banus: It’s one of the most important causes I feel right now in our times. So many people are dealing with mental illness, depression, kids dealing with bullying, and thinking suicide is okay. But it’s not okay. Three years ago I lost my dad to suicide and it was a really crazy experience for me. It was totally unexpected and I did not know anything about it. I didn’t even know that my dad was depressed. And for me one of the most important things to shine a light on is that you need to talk to someone always. If you have a problem at school that day, call the hotline. If you feel down, call the hotline. If today is your birthday and you didn’t have a good day, call the hotline. There is always going to be someone there to talk to you. Talk to your mom, talk to your dad, whatever it is you're feeling, if you think they won’t understand it, they will. And even if that person is closed-minded and doesn’t understand, at least they heard you let it out. We lose already so many people to other things - natural causes, accidents, cancer. It makes absolutely no sense to be losing people to suicide. Everything can be fixed. If you don’t have money, things can be fixed. If you don’t have food, things can be fixed. Someone will help you. You just have to ask for help. It is so difficult and I think that since I went through something like that I always want to be there to help. No one should go through that. Every 15 minutes someone dies of suicide, and every 16 minutes there are families left behind to deal with it. That is not okay in this world. Especially in the industry we are in, so many actors, musicians and artists take their lives.

The 40th Annual Daytime Emmy Awards nominations were announced this week. Do you agree with the picks? If so, or even if you don’t, vote in Soaps.com’s Seventh Annual Sudzies, where fans make the call on who was the most entertaining in Daytime last year.

Join us on Twitter @soapoperafan, and Facebook. Come tweet and Facebook with us about "Days of our Lives" all the other soap operas, "Dallas," "Glee," "Grey’s Anatomy," "Pretty Little Liars," "Revenge," "Vampire Diaries," and "Venice The Series." 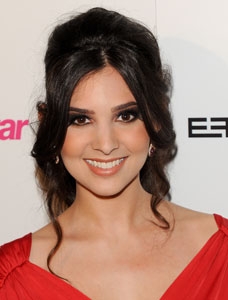 “He is there when she wants to be loved and she completely forgets about everything else.”

It’s been one whirlwind year for “DOOL’s” Gabi Hernandez. From kidnapping to baby-making, she is suddenly about to deliver a baby while married to a man she doesn’t know as well as she thinks. Actress Camila Banus spoke with Soaps.com about Gabi’s love for Nick (Blake Berris), what we can expect after the baby comes, and what Gabi really feels about a Rafe (Galen Gering) and Kate (Lauren Koslow) union.

Soaps.com: It has been almost a year since we last spoke, and you were involved with Andrew’s (Caleb Hunt) abduction of Melanie (Molly Burnett). A lot has happened since then, but does that still affect Gabi?

Banus: Definitely. Not only does she think about it, but other people who know about it still judge her. Chad (Casey Deidrick). Sonny (Freddie Smith) also knows about it and judges her. Nick also knows about it. He doesn’t judge her, but she still knows that he knows and she thinks about it all the time. She feels like she did something that was really awful and she was a bad person and she is really trying to forgive herself.

Soaps.com: Do you think Gabi and Chad will ever mend fences?

Banus: I think there have been glimpses of things being recuperated, but I don’t think they will ever get back to being good friends.

Soaps.com: What does Gabi think about Nick’s homophobic reaction to Will (Chandler Massey), her best friend and the father of her baby?

Banus: She hates it. She absolutely hates it. Gabi is a very open-minded person and when she found out about Will she was very supportive and very available. She wondered why he hadn’t come to her sooner, maybe there was something she could have done to help him. And she is supportive of Will and Sonny. She loves them together. And for her to have someone who she loves come in and not approve of that is really a bad thing for her because she wants everyone around her to be as supportive of each other as possible and as loving as possible and is kind. Having Nick come in and be homophobic is very surprising because she always thought of Nick as a very understanding person, especially after telling him the Melanie story and him understanding that, and him going to prison and understanding that people can change. It is very strange to her that he is not supportive of that.

Soaps.com: Gabi told Rafe that once the baby’s born, she thinks Nick will calm some toward Will. Does she really believe it or this some wishful thinking?

Banus: I can honestly tell you that Gabi is completely blinded by Nick. Anything that Nick tells her she believes because she is in love with him. This is the first person she has been in love with that she feels is actually in love with her. She doesn’t actually have to fight for someone to care about her – he cares about her regardless. Everything he says she believes because she trusts him so much. There are moments she finds weird, but thinks Nick would never do that. He’s been stressed with the baby coming, Gabi’s been stressed, there’s been scares and I think he wants what is best for Gabi and the baby.

Soaps.com: She found the room in shambles this week and threatened to leave Nick if he didn’t tell her what was going on. What does Gabi think is going on?

Banus: I feel like he is losing his grip because he is talking about things going crazy at work and missing files and things like that. Misplacing things and spending long hours online working, working, working. At this point Gabi is thinking he is losing his mind because he is not sleeping enough, not eating enough. He needs to put work aside and if he is not going to put me first than I am going to head out buddy, because I’m first. That’s what she is dealing with. And because he is in a very difficult position he is cranky and saying things he probably doesn’t mean, so all of those things combined are just added stress for Gabi. At this point she knows she has to do what is best for her baby, and added stress is no good.

Soaps.com: Is she afraid of Nick at all, or maybe afraid she doesn’t know him as well as she thought she did?

Banus: Yes, and that is something that is going to start happening in a couple of weeks. She is noticing that he doesn’t want to tell her too much about his past, he doesn’t want to open up about things that she wants him to open up about. She sees people telling her things about Nick that she never really noticed before – maybe OCD aspects also that she didn’t really know about. It starts happening when she asks him about his scar and what happened to him in prison. And other people telling her, “Oh, he didn’t tell you what happened in prison?” and those things start adding up and she wonders if he is not completely honest with her. But honestly, at the end of the day, he is there to hold her. He is there when she is lonely. He is there when she wants to be loved and she completely forgets about everything else.

Soaps.com: What do you say to fans who are upset or annoyed that Gabi doesn’t see Nick for who he really is?

Banus: Well, the fans see everything. They see Nick doing dirty business or doing things that are not right. But Gabi is not there in those moments when he is doing that, she is away or working, so they can’t expect me to suddenly know. Obviously there’s moments where people are like, “Are you kidding me? He’s lying to your face!” But she is blinded by somebody supporting her, taking care of her, and just being there. Understanding that she is a good person who has done bad things, but she is an amazing person and has a great heart. She is a family person and he knows all those things and appreciates those things about her. And not only that, but he gives her so much love. Coming from her previous relationship where Will and Gabi had sex twice, maybe three times, Nick always wants to hold Gabi, always wants to caress Gabi, kiss Gabi. Those are all things that really don’t help Gabi in the end but are helping her in the moment think she is in love and happy.

Soaps.com: How does Gabi really feel about Rafe and Kate?

Days of our Lives Spoiler Video: A Special Dessert

Days of our Lives Saturday Teaser Poll: Falling For It?