Filler:
Rafe and Nick’s meeting at the Coffee Bean was pointless. Kate meeting Rafe there after Nick took off wasn’t necessary since nothing was said, and Eric’s meeting with Abe at the pub was sort of senseless, too. There’s something to be said for the half hour soaps. There’s no room for filler!

Kate’s gift.
Can they be any more obvious that there’s a murder mystery on the way? I haven’t seen this in the spoilers but why else would Kate buy Sami a gun? It was an interesting conversation. Almost as if Kate cared. Of course there are now two sets of fingerprints on the gun. Why didn’t Sami tell EJ about it and is Nick long for this world?

Oh Kate.
Kate dumped Rafe for maybe the fifth time this year. He’s so laid back that it’s almost as if he doesn’t mind how juvenile it seems. Sure, we get it. She’s worried Stefano will do something to Rafe. Maybe he will, but he’s not the only one after Rafe. EJ’s insecurity is getting the better of him.

Stop. Thief!
Why did Sami steal Nick’s money? Spite? None of us have a problem with her and Sonny taking the confession because we want Will to be a hands-on father to his daughter-to-be, but stealing the money was too much. For all she knows, it could be for Arianna’s future and if Sami cares about her grandchild-to-be, she should return it.

Suddenly Vargas, Vargas, Vargas has lost his appeal. Maybe.
Still like Vargas? Such melodrama with Vargas "threatening" to tell Father Eric that Nicole has a thing for him. Who cares if the big bad Vargas spills the beans? It’s not a matter of life or death here. Another thought. Do you think Nick will tell Vargas that Sami has his money or will he deal with her on his own? Could Sonny and Will may be right and soon they'll actually have peace?

Gabi’s positive thinking?
It’s not easy to figure out what’s going on in her noggin. Is it pregnancy brain or does she really not see Nick has some major issues? Does she really think after the baby’s born that things will magically improve or is this wishful thinking? I couldn't stand not knowing so we went to the source. Find out what Gabi really thinks in today's interview with Camila Banus. She even teases about what's to come a few times, such as how scared of Nick Gabi will become and what happens when he tells her about his scar.

I know this will get a lot of razzing, but I have to admit, I've been feeling for Nick lately.

Dirty minds?
Did anyone else think Abigail’s starvation for dessert was a euphemism for sex?

Read Matt’s DOOL Musings. A taste: "I have to admit that I've grown to like evil Nick in spite of myself. The show has gone so far out of the way to make him unsympathetic that it's surprising they don't have him drowning puppies and kicking Gabba in the baby oven. Considering how outnumbered by obnoxious enemies he is, he manages to become likable simply by contrast." Agreed. 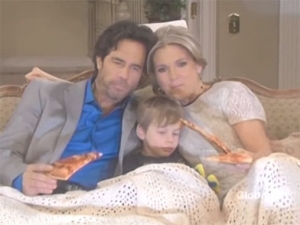 Arguing with his pardner.
John’s become so bored with his storyline that he has taken to faking some sort of southern accent when arguing with Roman? Usually it’s Roman who favours the John Wayne drawl.

Ciara’s secret.
Ciara and Kristen’s chat was bizarre. Ciara is a strange little kid. She’s kind of fun, yet weird. It’s unusual to see a child get her own storyline before a vet like Hope. There’s something off about Ciara being so obsessive with Kristen and that freaking photo – and by the way, who took the photo? Sy’s skeevy pal? Sy has a brain? Or did Stefano’s boy RicardBo kill Sy?

Liberating themselves.
Both Kristen and John confessed their master plans. They both want Brady to walk in on them in bed together. We can all agree with Stefano and Victor, who think it’s a sick idea. Victor had a good point when he asked if John could do something less drastic like killing Kristen. After all, John plans on losing his son and the love of his life anyway. Hmm. Is John an idiot or is his plan brilliant? Vote!

A dancer he is not.
EJ may be many things. He can be charming and devilish but the boy dances like my mum, especially with the “tsst tsst tsst.” He should never do that again. It does make sense that he’d want to disown my Stefano after being disowned the way he was last year. Who can blame him? It was horrible. Will Justin agree to it? Will they succeed?

The Three Stooges.
Will, EJ, and Sami actually trust Stefano to make the evidence against Will disappear? None of us trusts him! Everything Stefano does comes with strings attached. They’re not this dense so why write them this way?

A taunting we will go.
It’s been a cross between fun and tense watching EJ and Rafe snipe at one another. Rafe’s got that cocky smirk and lately those good comebacks while EJ’s got the DiMera way of being able to hide his emotions.

Dan and Jenn:
Daniel giving away his and Jenn’s dinner tickets to Abby and Cam was a really sweet thing to do. Afterward, he, Parker, and Jenn gathered under Alice’s giant doily from the 1950s which goes well with Jenn’s bland outfits, which she plans around her bland bedroom décor, which allows for her bland personality to shine right through. Yep.

Days of our Lives Spoiler Video: A Special Dessert

Days of our Lives Saturday Teaser Poll: Falling For It?