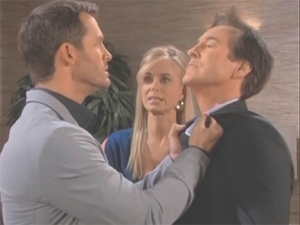 This week both Maggie and Abe stuck their noses deep into other people’s business, Anne too vowed that this wasn’t the end of her tirade over “Her Royal Hortonness,” everyone seemed to be eating cupcakes and doughnuts, and the men of Salem shed their shirts and gyrated onstage. Technically this was a four day week, because Monday’s episode was included in last week’s blog…

A size of crazy.
Father Eric caught Nicole and Vargas, Vargas, Vargas defiling the rectory office. He had issues getting the picture out of his mind, he says, because he’s worried that Nicole will make yet another mistake and cause herself more heartache but it’s more likely that he was picturing himself replacing Vargas.

Hokey: Nicole to Eric, “I want to be friends forever.”

Topless dancers.
When men watch women strip they’re very subdued about it but put a topless guy in front of a girl and watch the screaming begin. Why? Because women rarely get to see the goods. It was fun to see Brady, Rafe, and Daniel doing something so out of character. Daniel (Shawn Christian) is a natural dancer. Who knew? They were fun to watch and looked hot… even though they barely took anything off. Somehow in the midst of the dancing there was a storyline. Everyone forgot what it was about.

The question of the week… Who strutted his stuff best? And when will they be going back to this club and taking the guys who didn’t get to show it off the first time? Do Chicago strip clubs not show the Full Monty? Pity.

If you don’t want to hear the answer, it’s best not to ask.
Sami had to soldier through watching her brother and ex-husband do a little half-nakey jig for the crazed undersexed women of Chicago and Salem. Afterward, Kristen enjoyed making both Sami and Rafe uncomfortable by pointing out the big sparkly ring Eej gave his intended. She’s not winning any points as the sis-in-law to be. Rafe was kind about the engagement but Sami couldn’t leave well enough alone and being… well… Sami, she hungered for the approval of her ex-hubby and seemed surprised when she didn’t get it. Duh. Most people in Salem will react the same so she’ll need to grow a thick skin and ask Brady how he handles the backlash.

It’s impossible to buy that Jennifer suddenly has moxie.
It’s annoying when the whiny spineless character ‘suddenly’ does a 180 and gets a backbone for no apparent reason and that’s what happened with Jennifer.

Jennifer's room was noticeably bland to reflect her and Stripper Man's relationship. Matt always thought she would have had a bed made of dolls and I've always pictured Holly Hobbie drapes and flowered wallpaper.

Bo.
Alas, there’s still no word on where he is but we got wind from Hope that Bo’s return to Salem has been delayed. Ciara had a bit of a meltdown after hearing this and who can blame her? She’s tired of her parents leaving her and oh boy is she going to be a mess when she grows up.

It’s still difficult to find it believable that she would be so concerned about the photo of Kristen and Sy, especially considering she didn’t even know the woman in the photo was Kristen until she saw her with Uncle Brady. As well, she almost told Hope and Brady that she knew a secret about Kristen but what’s the secret? If she doesn’t know who Sy is, the photo should be meaningless to her, non? Seems like the writers are reaching here.

John’s plan.
It appears as though John’s plan includes keeping his distance from Marlena in order to lure Kristen in and get her to do or admit something that’ll get Brady away from her. So far it has brought out Brady's insecurity though it could still backfire. The big question is why isn't Marlena raging on John by now? It’s beyond annoying at this point that she hasn’t gone off at him. It’s long overdue.

Painful.
Sami and Will couldn't be more obvious buttering up Stefano in order to get his help in doing something about Nick. It's hard to believe that Sami, an old pro, is now so terrible at covert operations.

Read Matt’s DOOL Musings. A taste: "If all of the strip clubs in Chicago are this lame, no wonder only one manages to stay open past 9:00 PM."