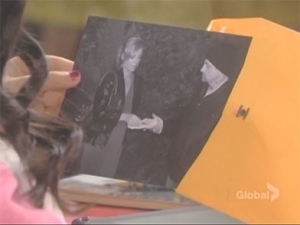 This week had Salemites doling out the advice. Vargas offered Nick advice about how desperation can screw things up, Hope suggested Marlena not stop fighting for John, and for John not to walk away from Marlena. Both Sonny and Will told Bryan to stop sniffing around Sonny, Caroline asked Sami to keep her wits about her before EJ’s proposal, but just like in the real world, only a few will take the advice. On to the blog.

The elusive envelope:
Skeevy Sy and his sleazy pal should work as Stefano’s henchman. They’re about as smart as any Stefano has ever had working for him. That envelope should have been personally delivered to Victor’s hands. Because of their stupidity, it was a concern at one point that we’d be watching as this envelope made its way from Salemite to Salemite for weeks.

“Dumb slob.”
Stefano thinks Brady’s a dumb slob. Shame he can’t be recruited as a sidekick. He could work alongside Ricardo. Since Bo’s been missing, the show brought in ‘RicarBo’, reminiscent of Bo in the 80s from the 80s hair and beard, right down to the leather outfit. Dig that belt buckle. I rewound the scene with him in it three times, just for laughs. Hope we see a lot of RicardBo.

Ew who knew the ‘dumb slob’ drove a tacky Ferrari? How did he get home from Victor’s after their meeting? Subway? Street car? Matt suggested maybe a Rickshaw…

Is she returning?
Nadia did a great job in her last scenes but Chloe left town in a very anti-climactic way. All this drama to prop Dannifer instead of telling what could have and should have been a touching storyline of obsession and a woman finding her way back to her former self. I’m not a fan of this style of writing. It’d have been nice to see Chloe stay and work out her issues with Marlena. There’s a lot of story left to tell.

Chuckle of the day: “Days78” says, “Their lack of chemistry is so boring that the thought of them procreating makes DNA strands unravel.”

Kate’s insecurity.
Maybe Kate never really did love Stefano. Maybe she’s finally falling in love – with Rafe and feeling insecure because she thinks it’s no strings on Rafe’s part? Pretty sure it’s not.

EJ’s proposal to Samanther.
A proposal is one moment in a woman’s life she cherishes so when a man phones it in and a woman's expectations are high, we criticize... Deep down it’s the life together that’s the most important thing. With that being said, we’re still going to dissect this one. EJ told Caroline he wanted to propose to Samanther at the pub to show her he wouldn’t try to keep Sami from her family, but he never has tried to keep Sami from her family so that didn’t fit, and it’s the second time he has said this to her. It was very low-key for a DiMera. After seven years, some of us expected bells and whistles, especially from a DiMera. Why couldn’t he have jetted Samanther off to Rome or Paris and surprised her with a jaw dropping proposal while a trio of musicians performed in the background under twinkle lights? Instead he opted to compare her to clam chowder at the grotty pub. At least the huge sparkly ring was fabulous. What were your thoughts on EJ’s proposal to Sami? Vote!

Lucas was pretty funny yet rude with his snarky remarks to the happy couple. It’s likely just the beginning of the nastiness that EJ and Samanther will face when news of their engagement comes out.

Abe's concern.
Abe has every right to be concerned for Cameron but a little sugar could have gone a long way instead of his griping about Cam not being available. You don't go to someone's work and lay into them. It's easy to see why Cameron lashed out at both him and Abby. The poor guy is exhausted. At least we saw a little Mabe (Maxine and Abe). Too early to tell if there's chemistry.

Anne definitely has something up her sleeve and it's pretty funny that Chad didn't see that she wasn't genuine. How many times have women seen this happen?

Chad and Abby's spark today was nice to see. Even if they don't get back together, it's good to see their friendship intact.

Maggie's back to her busybody ways but at least John put her in her place. Not that it'll help!

Ciara may have the photo of Kristen and Sy, but at her tender age, will she even know what it means?

Kristen, "This is sheer torture."

Gabi, "You're sleeping with Will's grandmother."

Chad, (about Caroline watching Cameron strip) "Probably part of her therapy or something."

Cameron, "They don't take Alzheimer's patients to the strip club for therapy."

Chad, "Yeah. You're probably right about that."

Caroline, "Your act was smokin’ hot."