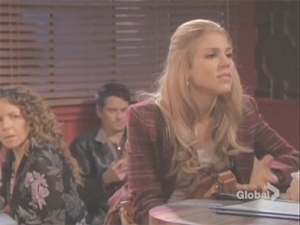 Things are coming to a head in the Chloe, Daniel and Jennifer triangle. We can see a light at the end of the tunnel, but the other storylines are still slow going. Let’s get into what went down this week in Salem.

Desperate times?
Twice now Chloe put Nicole down for her infertility issues. The first time Nicole and I were so shocked at Chloe’s words, Nicole let it slip by. The second time we had the satisfaction of Nicole sniping back about Chloe exploiting her kid. Still, it’s so hurtful and so unlike Chloe. I got the feeling that Chloe felt a touch guilty about having Parker keep his “special secret” but since then, she has become even more unglued and frantic to hang on to her fantasy that she and Dan can make a go of it. There’s seriously something wrong with her. He has been clear that he only wants friendship. She needs to let go. Since Chloe’s never been ‘that girl’, it’ll be nice to see her come to her senses and hopefully we’ll see a few apologies. If not, we’re contacting the “Jerry Springer Show” or “Maury.”

Question of the week: Where did Nancy and Chloe get the bucks to go to Brazil? A week ago she couldn’t even afford to get her own hotel room.

Kate’s insecurity.
Kate can’t curb those concerns that Stefano will find out she and Rafe are doing the nasty. Maybe Rafe is on to something and she is more worried that Stefano knows and doesn’t care! It was refreshing that she decided to focus on Will instead of Stefano but why go behind Rafe’s back when he could have helped with her scheme to get Gabi to sign over a few rights to William? It’s unclear of how it would work if Gabi did sign considering Nick already had Will sign his rights away. Would one cancel out the other? And why does everyone keep saying how happy they are that Will is going to be able to see Arianna when the documents were clear that he’s not? Did I miss something? Rafe still believes Will signed the document to keep Sami out of the baby-to-be’s life but he didn’t even give Kate’s document a chance so how does he know it’s not what’s best for his sister? He’s ex-FBI so this doesn’t fit for his character unless we are to assume that Kate’s right and his jealousy is clouding his judgment. This argument may push these two toward letting go of their exes and perhaps make them realize they actually care for one another more than they thought.

Mag the nag.
Though it’s good to see a mother and son so close, especially these two, Maggie is getting into Daniel’s love life like a little too much. And how does she not see right through Jennifer? She was so hurt to think that kindhearted Jenn would do something so drastic as to humiliate Daniel but didn’t once consider that something was up? Same goes for Daniel. Even “cuz” and Nicole thought something was up. Maggie was also a bit daft to actually think that Kristen wasn’t ‘that devious’ to set Victor up. It would have been great to see Maggie attempt to get to the bottom of this rather than see her sobbing and not using her head!

The return of Laura Horton.
What are your thoughts on Laura's return? All I remember about Laura is how unstable and whiny she was in the past. Not the case today. She was a rock. It was strange to see her with Jenn after being gone for so long. Jenn did find solace. I guess. The scene was at times painful to watch with Jennifer acting so erratic and talking in circles.

Even stranger was to learn that Laura lives at the rectory in Salem – same walls and doors!

Officer Nightstick's story.
Since she thought Jennifer was out of the way, Anne was out to make life miserable for Cameron. She headed to the club in order to find out Cam's secret, but wound up getting distracted and fed double shots by Chad while Abigail tried to stop Cameron from doing his thing. At the end of the night, Abigail gave Cameron a taste of his own medicine by accusing him of lying and mistrusting her. What this means to their relationship is anyone's guess but this scene sure injected some passion and generated some interest between the two.

What are your thoughts on Cameron meeting Stefano? Do these two have a connection or was there some other not so intriguing point to their meeting?

These boots are made for walkin’.
Will got Sami and her Nancy Sinatra do all in a tizzy when he wondered if EJ had an ulterior motive for moving her and the kids into the DiMera mansion. What made Will come up with this? EJ hasn’t given any indication that he’s being anything other than supportive of Will and ensuring Nick is "squashed like a bug." It’s good that Sami immediately questioned EJ’s motivation but were we supposed to think it was plausible that EJ has an ulterior motive after their exchange about him taking on more of the business? Hopefully this means EJ won’t be so tame.

Yesterday we interviewed Kristian Alfonso. We asked if the show should address the lack of a divorce between John and Hope/Gina. The actress said, "I don’t think so because a piece of paper will not change how the couples feel about one another." A fan on Twitter, Geobear4, let us know that on December 18, 2012, Marlena addressed this: "You know, when we found out your divorce was finalized and we were all prepared to get married again, life was perfect. And then Kristen came to town..."

After months of this huge storyline, this is all that was said and most of us didn't even catch it. That's a shame. It solves the mystery but wouldn't it have been better to make a bigger deal about it?

Kristen: "You forgave Sami. Next to her Father looks like Mother Theresa."

Read Matt’s Matt’s DOOL Musings. Matt says, "Dr. Cowabunga got something to holler about when he received confirmation that Nancy had run out of the country with his child. The doctor was horrified that his son had gone to Rio without him and come back without even getting a fake tan. He confronted the diva about her misdeeds. She was apologetic and then threatening and then apologetic and then threatening and then..."

Interview: Days of our Lives’...