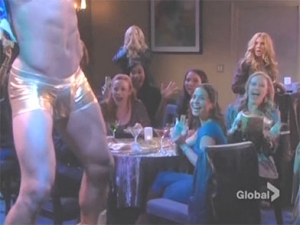 Yet another low-key week for “Days of our Lives.” There won’t be much of a change in the writing or the pace in the weeks to come, either. It’s becoming increasingly easy to forget what you’ve watched after each episode airs. While the one-liners about the DiMera’s being vampires are fun, this week was still pretty dark. Dannifer as the main storyline is taking a toll on viewers. It took the entire week for them to break up and little else happened. Our dearly departed Roger Ebert may have given this week two thumbs down.

Double standard.
Most viewers have been cursing the show because they have Rafe in bed with Kate when there’s an 18 year age gap between the two and there is a 12 year difference in Kristen and Brady’s age, yet Stefano brings home a woman who is about 45 years his junior and nobody bats an eyelash. I applaud “Days” for writing for the older woman dating the younger man. The double standard needs to change.

Dare we care to speculate on whether or not Cecily’s simply a girlfriend or a Rolf substitute since she’s gone?

Will asks EJ to keep a secret from Sami.
On one hand, it’s a good idea to keep Sami in the dark about Nick’s homophobic tendencies being the real reason for him forcing Will to sign away his rights to the baby-to-be, because she’d likely screw Will royally, though unintentionally. On the other hand, it’s not right to let Sami wallow in her guilt, thinking this is all her fault. It’s only going to be worse when she finds out EJ knows the truth and didn’t tell her. Then again, if all of their fights wind up in bed will it matter? These two are written like they live in a 1930s film. It was strange watching Will elucidate to EJ – who couldn’t possibly understand – that he couldn’t live without his daughter. I think if anyone, EJ is the one person in Salem who does understand. It was a slap in Bo’s face though that Will “forgot” to include Bo in the list of his family members who would get into trouble if the evidence of Will shooting EJ were to come out. Acting as though Bo doesn’t exist is almost offensive. Vote! What to do about Bo?

Do Sami, Will, and EJ think Stefano’s a moron?
This trio was so obvious when greeting Stefano what with all of the big fake smiles, that I’m sure Stefano saw right through them. It’d be interesting if Stefano refused to get rid of Nick for them. Then where would they be? And really, why does EJ need Stefano’s help? He was the black gloved crime lord amongst other things. He should be able to come up with something to get rid of Nick.

If Stefano decides to help them, there had better be something good that he lords over their heads for his trouble!

Pointless scene.
Sami lashing out to Nicole about ancient history was painful to watch. Sami’s happy now and happy people generally don’t look to put others down but not her. Though it’s just like her to attempt to protect her brother, it was forced and only used for Vargas’ benefit. It was annoying and only reminded me that Nicole’s own storyline is on the back burner for Dannifer. Monday, Eric got an email that surprised him. We had to sit through the Dan and Jenn affair all week until Friday’s episode to finally find out that some mistake lead them to believe he was being sent to another parish for about five minutes. Though Nicole’s tears always get to me, it’s hard to get on board with a story that moves at a snail’s pace.

And what’s with Nicole telling a perfect stranger her life story? Has she not heard of the words, “It’s none of your business?” If he didn’t have a great body would she have reacted differently? Can’t they write our Nicole as less pathetic for a while?

Vargas always walks around town with his tool in his hand?
Nick looked as though he was about to pass out after he came in contact with Vargas. It’d help to see the beating take place. Otherwise, again, there’s no way to really get into Nick’s shoes and fear Vargas along with Nick. Now that Vargas is out, he seems to only want Nick’s help in getting rich, which doesn’t make viewers fear him. Hopefully there’s more to this story than what we’re seeing. If the pace picked up, it’d really help.

"You had me at clumsy."
What a turn off. There should have been a news ticker across the bottom of our screen when Daniel said that, just to warn us of impending cheesiness. Jenn ripped into him like a pro. I think I saw Anne passing around popcorn during the spectacle. Dan's kiss with Chloe was a surprise and truly, it was more shocking that in his state he had some restraint and didn't have sex with her.

Jenn had the worst week and at the end of it, she didn't even get to smack Chloe. What a shame!

A stripper? That’s it? Seriously?
Cameron’s big secret is that he’s a stripper? What is this the 1990s? Nobody cares about this. This isn’t a big deal. We all knew and were friendly with girls at school who stripped and were escorts in order to pay their way through University. This isn’t exactly current. If he and Abigail made love and then she found out he was an escort, that would be a shock and she’d have reason to be disgusted but this? What a letdown! It brought some much needed humour to the end of the week, especially from Chad, but we were all hoping it was something dastardly!

Be sure to read Matt’s Matt’s SOF Musings. Must read. A taste: "I have to confess that I missed part of this week's proceedings. By the time Thursday had rolled around, I'd taken so much of a Dannifer overdose that I actually begged Soaps.com's Christine Fix to either shoot me or bury me upside-down in a garden to be eaten alive by ants. Since she is completely evil, she refused and strapped me back into my chair in the basement at SoapOperaFan with my eyes stapled open. All the same, it was still hard to stay awake when the most threatening thing on screen was Vargas."

It sort of happened this way... if I have to watch, so does he!