Kate and Rafe.
It’s a crying shame Stefano and Kate didn’t make it work but this new animosity for each other could be fun, too. She and Rafe seem to be building something out of their tryst, which is pretty light and causing quite the interesting stir. Sonny finding Kate on her knees in front of Rafe was funny, though his reaction was a little over the top. It’s a surprise, sure, but like Sami said, he seemed as though he saw a ghost. Daniel's reaction was more of a surprise, considering what Kate has done to him and Chloe in the past.

Limbo.
As Kristen and Brady get more involved, John’s behaviour gets more puzzling, and his treatment of Marlena is more appalling. Marlena’s a strong woman. How can she stand it? She seems to have lost her fight. She hasn’t even asked him to go to couples therapy. It’s becoming increasingly frustrating to watch and at this point it’d be a welcomed relief if she finally told him off and dumped his arse. I realize she loves him but enough is enough. This is the same type of writing that the show did for Bo and Hope and look how that turned out. Dare I bother to rant about Bo's whereabouts?

"I’m a winner," says the bitter cray cray loser.
Chloe was both uncivilized, funny, and a sad lonely figure as she and Nicole had it out outside of the pub over Daniel. Chloe has completely gone off her rocker. Rubbing Nicole’s face in her inability to conceive was inexcusable and unforgivable. Maybe it’s foreshadowing? If that wasn’t enough, she’s now blackmailing Jennifer to stay away from Daniel or she'll take Parker from him. Nice parenting skills, coming from a woman who trashed Jennifer for insulting her in front of her kid. Chloe sure pulled out all the stops with the blackmail. Reminding Jenn that Daniel has no rights to her son and then confirming this by showing her Parker's birth certificate with no father named was the pièce de résistance. Nancy's expert scheming must be rubbing off on her. Ouch. Poor Jenn. Poor Parker. Poor Daniel!

Check out Soaps.com's Interview with Patrika Darbo (Nancy) about how far Nancy will go to get Chloe her man!

Mansion dwellers:
We're still waiting for more drama in the DiMera home but lately we're seeing something unusual. They're dressing down while at home, instead of say, folding laundry in stilettos and a mini-skirt ala Chloe. Kristen’s had a dressing gown on during breakfast, EJ wore a nice sweater and jeans one morning, it’d be nice to see Stefano out of his suit. Even the sofa is getting a new look according to Kristen. It’s probably a good idea considering all the action it gets.

Read Matt’s Matt’s SOF Musings. A taste: "This scene was complicated by the fact that John kept trying on different eyebrow toupees since he burned his organic pair off by glaring into the sun too long." 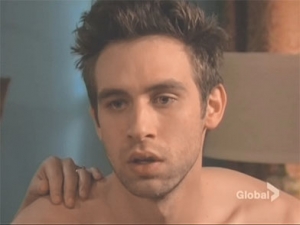 Not a whole lot happened this week. We’re still dragging the Chloe/Dan/Jenn triangle on, Marlena is still in limbo… It’s pretty sad when a minor player, Vargas, has more intrigue in his storyline than the major players. We do have an official theme: Blackmail. It’s the theme of the month. We’re seeing it with Nick blackmailing Will, Chloe blackmailing Jennifer, possibly with Cameron paying off some random dude, and it looks as though Kristen’s next. It’s exciting to have it in one storyline, but three? Not so much. Onward with the blog…

Poor Nick?
Did anyone else feel for Nick momentarily this week when he had that forlorn look on his face when telling Gabi about his time in jail? That’s a testament to Blake Berris’s fine acting skills. So is the fact that we all still loathe Nick for his bigotry! It was really disappointing that he didn’t really give Gabi much of a story about his time in the big house. Maybe we’ll see more via flashbacks and when he is in scenes with Vargas.

Vargas, Vargas, Vargas.
He has a cool name. He’s already charming Nicole, he’s not trust-worthy and boy Nicole’s in trouble.

Cameron the enigma.
Cameron may not want to hold his breath on Abigail giving herself to him. She’s very cautious like her mother, and as about as exciting as her, too. Since her virginity is so well guarded, it’s unclear why she’s even considering giving it away to someone she doesn’t even know or remotely have any chemistry with. She needs to stop teasing the man and he needs to find someone who can give him what he desires. His insensitivity was a big ole red flag and I don’t think any of us bought his apology.

What do you suppose Cameron’s deal is with the gun and stash of money? What was the pay-off for? Is he a gigolo? In debt with a bookie? Buying or selling drugs? Is he undercover? Here are more theories of why Cameron was paying off that man in the hospital. Vote on what Cameron’s secret is!

Days of our Lives Saturday Teaser Poll: The New Girl