Soaps.com: Does Nancy feel like she is using Parker (Evan and Luke Kruntchev) at all?

Darbo: I think that as Chloe is protecting Parker, Nancy is protecting Chloe as an extension of that. It is so hard for me as Patrika having not been there for so long. Nancy’s character was written in such a way that she would have walked through fire for her daughter and her husband and now Joy. So for all of the things that happened to Chloe – and there were changes and upheavals going on all over the place with writing and producing and things like that – but Nancy would have been there in a heartbeat and those things would have never have happened.

Should Nancy come back, I would hope she would come back to put Kate (Lauren Koslow) in the ground. Not in the ground, but in some really, really bad situations. Because payback is a bitch. And how dare Chloe be friends with Nicole considering Nicole put that flesh-eating disease on her face? I was a pretty calm returning mother so whatever I do is not nearly enough of what I should do.

Soaps.com: Do you think that Nancy will ever get her revenge on Kate for turning Chloe into a prostitute?

Darbo: Honey, that is only if they ask me back again. But just from my emails prior to coming back in the first place saying, "Where the hell are you? Do you know what they are doing to her? Do you have any idea? You need to be here, you need to be here." I am an actor and not the writer or producer, so I would just have to say, "Keep me posted. Maybe I will have to set a bomb up there somewhere."

Soaps.com: How much longer will Nancy be in town? It sounds like she is leaving soon.

Darbo: I don’t think I am here much past the first part of April.

Soaps.com: What other projects are you working on?

Darbo: I just finished filming Marc Cherry's new show "Devious Maids" which isn’t airing yet. And I am getting ready to do a sequel to a feature I shot last year that is a fun kid’s show, the Mickey Matson series which is being written by a director, writer and producer out of Michigan, so I will be off to Michigan in the first part of June to do that. And I am auditioning all the time. The older you get honey, it is a little tougher because everyone is 20 and their parents are 21.

Soaps.com: Well we have just loved seeing you in Salem.

Darbo: It has been my pleasure to be back. I love all the people I am working with, the crew and cast are great and hopefully they will say we need her back. And we need to bring back Kevin (Lambert, Robert Benvenisti) and we need to age Joy. Can you imagine aging Joy and bringing her back? I could hit on Jennifer’s (Melissa Reeves) new son (Jack Jr.) with Joy. And what you must remember – I didn’t raise Chloe. But I raised Joy. So you know that she is her mama’s daughter. Then again, she may not be her mama’s daughter. It would just offer some monkey wrenches into the situation.

Catch up with "DOOL's" deliciously bad Anne Milbauer in our interview with Meredith Lynn Scott. Then see who will be spinning the turntables when OLTL returns next month. 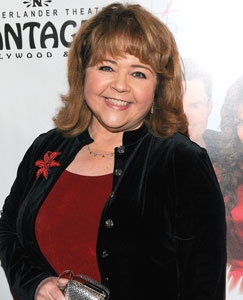 “If Chloe wanted Stefano, Stefano would be good for her as far as Nancy is concerned.”

Ever since Nancy has returned to Salem she has been up to her old scheming ways, this time helping daughter Chloe try to get her man, Dr. Daniel (Shawn Christian). Soaps.com spoke with actress Patrika Darbo about her return to town, her plan to help Chloe and her impending departure.

Soaps.com: How were you approached about returning to the show?

Darbo: They just called me and asked my availability and at the time I was available and when it works out that way it is great. And I had such a great time before so of course I would come back.

Soaps.com: How did it feel being back in Salem?

Darbo: It was terrific. There were a lot of changes that I didn’t know about and the kids were all grown up. And there were a few new ones I didn’t know because I am not an avid watcher when I am doing other things, so it was a schooling thing for me to say, “Now who do you know? Which one were you when you were 2?” And just finding out that Chloe (Nadia Bjorlin) is now friends with Nicole (Arianne Zucker) and those kinds of things. Nancy would have been hard put to have had those things happen, and there are a few people who would have been eliminated had Nancy been around earlier.

Soaps.com: How is it working with Nadia again?

Darbo: I love and adore her and even when I wasn’t on the show, her mom and I are good friends, so I would see her at events and knew what she was up to. It is just so amazing to see her grow up.

Soaps.com: Plotting seems to come pretty naturally to Nancy. Can she even help it?

Darbo: You know what? I don’t choose to call it plotting. I think it is just that we all protect our loved ones, and she is going to find a way to help her daughter have what she wants, even though in her heart of hearts some things are not what they should be. But she loves her daughter and will do anything for her.

Soaps.com: Speaking of that, does she think Daniel is even good for Chloe?

Darbo: If Chloe wanted Stefano (Joseph Mascolo), Stefano would be good for her as far as Nancy is concerned. Like any parent, on one side of the aisle you are saying, “Honey, think about this.” But on the other side you are going, “Now that you’ve thought about it and that’s what you want, no contest, let’s go get it.” And I think a lot of parents still feel that way for their kids. They may not have the abilities to do some of the things that Nancy can do. But people protect their kids, or at least they should.

Soaps.com: How far is Nancy willing to go to protect Chloe then?

Darbo: I have a gun in my pocket honey!