Suddenly Cameron just got interesting.
It was good to see Abigail stay out of Cameron’s business after witnessing that huge money exchange between him and... who...Dr. Baker’s old bookie? It’s not as though Abby knows Cam enough to ask him what was going on. Who was that guy and why is Cam paying him off? Which recycled storyline do you think the writers will choose? Gambling or something to do with body parts?

Family drama.
Maybe John keeping Marlena at arm’s length has more to do with getting through to Brady than a lack of forgiveness. It’s just so unlike John to hold a grudge especially for so long. Once again Roman just happened to be on hand for support.

Poor Brady. You could see the hurt in his eyes when his eavesdropping paid off and he learned John was playing him. He’s had such poor luck with relationships. He could use a call or visit from his friend Melanie to unload. He told John and Marlena that all he has ever wanted was to belong and be a part of a family. Since when? Is this supposed to be why he's so dense when it comes to Kristen? Because he's supposedly so needy he can't see the forest through the trees?

One could argue that he asked for Kristen’s hand to get back at his parents like a little sulky kid, not because it’s what he truly wants, considering he told Kristen he couldn’t marry her even if he had Mama and Dada's blessing. That being said, maybe this whole thing is a set-up and he and John are working together. The latter is doubtful only because he opened up to Eric about his fear of losing yet another fiancee.

Vargas.
Father Eric gave Gabi a bottle of wine for her wedding and told her Jesus made wine out of water so she can...turn Nick into a bottle of wine... Did Jesus turn rats into wine?! I really have no idea what he was talking about or why he told her not to drink it until after she gives birth. Quite honestly, the show has been so boring that I often forget the entire episode after it airs. That whole scene was weird and a prop for Vargas to find out who Nick’s married to. I’m not sure about you but I’m rooting for Vargas to cause Nick a whole lot of trouble! Especially after calling my Sonny a f*gg*t. At least Sonny can hold his own and proved he has Nick's number.

It'll be interesting to see Eric watching Nicole lust after Vargas. Will he become jealous? Will he even notice?

Gabi’s more naïve than Will is or perhaps even Brady. Maybe it's sheer stupidity. It’s malicious and illegal of Nick to blackmail Will and abusive of him to Gabi to blackmail – oh sorry – ‘make an agreed upon deal’ with her baby-daddy to stay out of his daughter’s life. She doesn’t see this? How does this make you feel about Gabi now? Vote!

Gabi needs to tell Rafe what’s going on and Nick needs a dictionary to look up the word "blackmail." 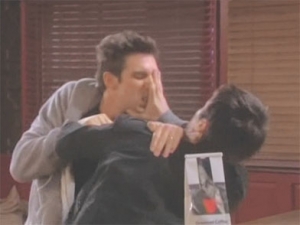 The theme of the week is eavesdropping and the storyline focus was mostly on the same six or seven players. Viewers are complaining about the lack of pizzazz. Many are still watching out of habit and boredom rather than the need to know what happens next.

Jenn, Dan, Chloe.
During this week’s break-up, Daniel told Jenn, “I’m sure Chloe told you I didn’t reciprocate.” Jenn confirmed, Chloe did tell her he didn’t. Later, in the cabin, Jenn claimed not to know anything about the kiss, so what was Jenn talking about that he didn’t reciprocate? His feelings?

Once again, Jenn was unable to think for herself and the troops rallied to do it for her. It was Kristen to the rescue – that’s a phrase you don’t often hear – when she, not Jenn, asked if Daniel did the diva. When Dan realized Jenn had a “Three’s Company” moment, he seemed overjoyed and ready to get Jenn back in his arms but didn’t he tell her literally five minutes before that maybe she wasn’t ready for this relationship? That it was too fast after Jack and that she’s been finding fault at every turn with their relationship because of that? If that’s the case, nothing has changed so why are they back together?

Chloe’s tenacity is admirable though she needs a new hobby. It’s time to let go, not come up with a diabolical plan to drive a wedge between Dannifer. She went from desperate to cray cray on Friday’s episode which is both exciting and frightening.

It’s easier to see how Anne can justify at least a small bit of her hatred for Jenn. After all, Her Royal Hortonness took off from work in the middle of the day to mope over a man at the Horton cabin on Smith Island instead of doing her job. Maybe Anne’s the one picking up her slack. Her hatred of Abigail seems to be only because she’s the evil Jennifer’s daughter. An “elitist little snob” though? I don’t see it but it doesn’t matter. Anne entertains in any scene she’s in. Love her or hate her, there’s always some feeling toward her!