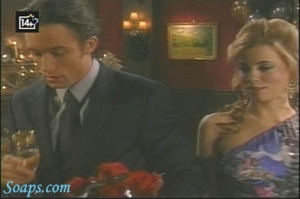 Will her baby wind up in Nicole's arms? (Soaps.com)

Though Candace did the thoughts last Friday and though I posted thoughts for the entire year, there are still things to say for the past week…

Random thoughts: How do Stephanie and Chloe know each other? They don’t. Why would Chloe go to Stephanie and tell her that she thinks she and Philly are rebounding. Shaddup, tramp, er. I mean Chloe. Mind your own men.

I like Mary, the DiMera maid. She’s cute. I’d still like to see Hilda around Salem, after Sami’s out of the safe house. Not as a housekeeper but as something or other…

New Year’s Eve Stephanie had a hair mishap. She’s so young and cute that I’d have liked to see her in a more hip look.

Holy sizzling champagne. Did you hear it? I couldn’t make out what was said in the scene with Kate and Daniel at the Kiriakis mansion, NYE. I heard the champagne bottle pop, then sizzzzzle, fizzle….sizzzle….went on for hours it seemed and then Daniel says something and Kate says, “Shhhhhhhhhhhhhhhhhhhhh, don’t ruin this with your self-effacing blah blah,” the shhhh went on for eons. The whole scene weirded me out and I didn’t catch what was said. Good thing I wasn’t the one writing it! Kate tells Doc Hands that she’s now immune to his charms and has no more desire for him, so look for her to end that relationship, early next week.

Out of Rafe’s mouth:

Old-John used to have “And that’s a fact.” Bo’s got “Fricken.” Victor Newman’s (The Young and the Restless) got “You got that?” Now Rafe’s got “It is what it is.” He said it twice already!

Sami and Agent Mind-reader continued to argue over Christmas and the FBI agent didn’t figure out what all of us have already figured out, that Sami’s going to give up EJ’s kid for adoption. Even when Sami practically told him what her plans were, the FBI agent still couldn’t put two and two together, and then we finally see it dawn on him, but he refuses to let Sami give up her kid. Eh? How is this any of his business? Oh and according to EJ, we’ve got one or two more months of this, which puts Sami at 7 months along. Ugh! Please end it now. They’ve got Sami thinking she can give up her kid for a short time, which is ludicrous. Sure Sami, drop the kiddo off at the orphanage for a few months and then go back and get her or him… how horrible! Oh, and obviously the child is a girl, since Nicole’s was a girl and we all think that Nicole will end up with Sami’s baby. That’s not a fact, nor is it foreshadowing. Just a thought.

Funniest line of the week – Sami -“I was raised Catholic. My faith means something to me.” What that is, we don’t know. Hypocrite.

Rafe called EJ a mobster, which threw me. EJ’s not a mobster. Is EJ a mobster? Are you laughing? I suppose Stefano is “supposed to be” one. I don’t think the show has ever referred to Stefano as a mobster!

Nic and the baby broker:Watching the Nicole and Doc Callahan scenes were painful, as usual. He’s not much of a character. Can they get on with this already? We now know he’s a baby broker, which doesn’t make a lot of sense, considering he could have offered Nicole a baby at any time. Not just that but it has had me wondering if Nicole’s baby really is dead or if he sold it.

Nic’s little elf: Brady showed up for Nic and EJ’s party after midnight. Nobody called him to cancel? And why did she cancel? Just because EJ was working? Who cares!? The party must go on. Not like he wouldn’t make it back in time for a few drinks.

Victor, Brady and Philly: I don’t get the animosity. Phil made a mistake, sure, deciding not to use Melanie’s (Nick’s) alternative fuel project, but why is this being carried on? Its one issue out of what appears to be a perfect record and Victor fires him? It makes no sense – I like Victor as a villain and all but they should have had Philip piss Victor off more than that to have him at his throat so much. Victor fired both Brady and Philly, but I didn’t really catch why. Because they’re not yes men? That’s Philly’s theory and he’s got a point. The only cool part about this is that Brady and Philly are going against Victor, which means we’ll see more Vic and more drama.

They’re not pals, but… Melanie got Chelsea thinking about her feelings for Max, over the holidays. She tried to deny them, not thinking she was ready to be in a relationship. She was ready to kiss him after the countdown, so it's one good deed for Melanie, oddly. Chelsea thinks that when a guy wants to talk, it's either about sex or football. Hrmph.

Chelsea tried to get Victor to fire Melanie. Here's what happened.
Vic: She has a lot of drive and ambition and most importantly, she controls the alternative fuel project.
C: That's what this is about. Profits from that project.
V: I don't run this company for my health. Course it's about profit.

Oh boy. Chelsea doesn't have a mind for business. This showed me just how much she needs to learn. Melanie's got determination and drive, sure. Nobody can deny that. However, she went from secretary to executive just because she holds a patent? I don't think so. That's just ridiculous writing and I didn’t feel it was believable even for a soap.

Which is it going to be? Kate asked Chloe to move up the wedding date, causing Daniel to get flustered. He wants the bim for himself, see. Kate pointed out that if the transplant doesn't work, she hasn't much time. Too obvious.

Chloe spilled the beans about Dr. Love to Nic, who gave her advice to keep quiet about her attraction for somebody else. True, attractions come and go, and if they're not a threat to the relationship, who cares, right? Not in this case. One has to wonder if Chloe should be honest about. Sometimes the reality of it will make it seem less intense. Not so forbidden, you know? So I'm not sure I agree with Nicole's advice this time. In relationships, lying’s not the right answer.

Lucas and Kate worrying about Chloe and Daniel on New Year’s Eve gave me a headache. NYE lasted about five minutes, so it made them look desperate and controlling. They sat there, waiting, instead of dancing and having fun. The scene was off. Is it the directing?

Tony warned EJ that Stefano was trying to take over his life. He's likely right but EJ didn't listen, because he's a yes man to Steffie, or what? So he left for a meeting on the biggest night of the year and Nicole wasn't the least bit upset that EJ had to go into work on New Year's Eve. She was very accommodating. Very sweet. I found myself surprised. A woman prepared for a night on the town or a party on NYE and she’s not even the least bit bummed out that her man won’t be with her? Doesn’t fit. Then…. She left to see Doc Baby Broker and upon her return, EJ was controlling, asking where she’d been. Uh… what is she on a leash? He was out, so what did he expect her to do? Shine the freaking silverware? At any rate, EJ then assumed that she left because she was angry with him for leaving her and taking her for granted. 1. Boy. These two are getting married and don't even know each other. 2. His assumptions don’t make sense, unless he thought that she was lying about telling him she was fine with him going to work on NYE. He apologized for being insensitive to her needs and blah blah blah and proposed. Wasn't a nice proposal.

Jarlena: John interrupted Marlena and Charlotte's New Year's Eve dinner. (Why wasn’t she out with Steve and Kayla or Roman or….??) Charlotte pointed out that it wasn't appropriate for him to hang with her and she left. Eh? Shouldn't he have left? I gather she hoped they’d have a lovely night together but what about her night with Marlena?

Julie and Doug were adorable at the party, sipping champagne and drinking to each other, but I'd have liked to see Bo and Hope there. How boring that they stayed home and did nothing. I gather it was a money saving effort from the show, and I’ll try to be supportive but it bummed me out!

Philip and Stephanie squirmed when Mel showed up at Chez Rouge for the party. If I were Melanie's friend, I'd tell her to move on. Quickly. He is interested in Steph. Steph was so worried about that stupid scene with Melanie, leaning in for a kiss, yet in Marseilles, she walked in on Max making out with a hottie and laughed it off. I don't get it.

And those are my thoughts. What are yours?! See you this coming Friday, with more!

Days of our Lives’ Stephen Nichols...