Father Eric gets it!
In a completely shocking turn we learn one Salemite doesn't dig incest. Father Eric informed Ciara that they can’t marry her, not only because he’s a priest but they’re cousins. He must be the only person in Salem who believes this!

Poor Nicole. For once, she is actually showing some restraint with a man. It’s so pitiful to see her trying so hard to find a way to stop loving Father Eric, but if she really wanted to stop her feelings for him from growing, she’d quit her job and stay away from him. Because she isn’t doing any of that, it’s making it difficult to feel her pain. A slow build in this story would have worked wonders. Ten minutes ago she was in love with Daniel, ten minutes before that EJ, and now she fantasized about telling Father Eric that she thought she moved on from him "a dozen times" but now knows she never did? She and Eric never had a great love affair so where is this coming from? And seriously, everyone knows that priests can’t break their vows so why even let yourself go there? Girl needs to move out of the convent, get a new job and stay away from the rectory and Father Eric. Unless... he's more into her than he's letting on or admitting to himself. Then he has to make a choice, but really, are they suited for each other? I admit I'm still having issues with this because that collar to me looks more like a stop sign!

Victor disowns Brady.
Didn’t Victor disown Brady a dozen times before? He’s getting as bad as Lucas who used to disown Kate at the drop of a hat. At least Stefano’s back. John too and it appears he has a plan to get Brady to see Kristen’s using him.

Now to figure out if anything is going to happen between Roman and Marlena...

The triangle.
Nancy's a pretty good schemer which Chloe needs desperately. It was surprising that Nancy told her daughter that she can separate Jenn and Dan but if he doesn’t love her she can’t make him. Seems Chloe should have learned this a long time ago. Nicole also brought up a good point – Chloe may not even be suited for Daniel anymore. She’s no saint like her Royal Hortonness but Dan does seem awfully worried about hurting Chloe’s feelings which shows he still cares at least to some extent. It was entertaining seeing Anne eavesdrop on Jenn and Dan and report back to Chloe and Chloe attack Daniel with a kiss while he was drunk.

How nice to see Maxine being incorporated into the storyline a little more. She brings humour and warmth to the fold. 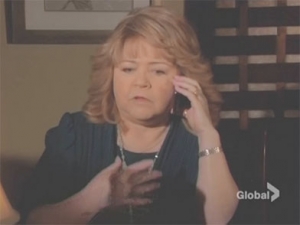 It was an underwhelming week filled with seduction, manipulation, a return of Nancy, one of Salem’s finest – puppeteers, and speaking of which, Stefano’s back!

She means well?
Nick may be psycho but his diatribe against Sami was rooted in reality. Though she unselfishly offered to sign a document to stay out of her grandchild’s life, he’s right. She’d “elbow” her way into the baby’s life as soon as she possibly could. That’s who she is. That’s what she does; she makes promises she intends to keep but it never happens. Plus, we’re talking about her grandchild here. That’d be torture for anyone to stay away. My jaw almost hit the ground when Sami told EJ she didn’t know how anybody could do something so cruel to the father of a child (as to keep him from his child.) Such a bloody hypocrite! She did this to EJ twice and he didn’t even raise an eyebrow at her.

Some ladies seduce their men for diamonds but Sami seduces for murder.
EJ and Samanther are similar to how I envisioned they’d be if they were a couple but her manipulation of him in bed was not really necessary. A DiMera doesn’t need to be talked into taking revenge. Though it was fun to see them scheming together and enjoying each other so much, getting turned on by discussing ending someone’s life was sort of oh I don’t know, sick? Vote in our poll asking your thoughts on EJ and Sami’s murder discussion during sex.

Where was EJ on this one?
Sonny’s comment about EJ being no more of a lawyer than Snooki’s an actress was funny but didn’t ring true. He has kept the DiMera’s out of jail for years so he must be pretty good but why didn’t he anticipate Nick’s blackmail? The DiMera family motto used to be ‘seeing all and knowing all’. How disappointing that he didn’t have the notary on the DiMera payroll!

Will.
One of our posters, wash_08 took the words right out of my mouth when saying, “Where is the swagger Will had when he was blackmailing EJ? I mean, here is one of the most feared names around, DiMera, and you can’t shut down your freakin’ cousin?”

Will has gone soft and is now fantastically thick. When did that happen!

Vargas doesn’t sound like the sharpest knife in the drawer which could be amusing. Nick talked him into protecting him for three years – from what? A rapist? What is Vargas going to want for payback? If Nick doesn’t comply, will EJ and Sami become pals with Vargas? And the biggest question Matt pointed out – how come Hope didn’t know Vargas was Nick’s cell mate? Maybe the second biggest considering we’re another week in and still no discussion of Bo…

Days of our Lives Video: Nurse Of The Year