In another surprising twist this week that I didn’t see coming, Nicole sat down to confession with Eric, thinking it was Father Matt. The confession didn't get very far and Eric was still clueless about her feelings.

Puzzling.
Abe came up to Marlena this week and she acted as though she hadn’t seen him in 30 years. The woman is clearly lonely and she’s also lost her marbles. When she tried to call John from her cell and saw that her cell phone was dead she actually thought it must be some sort of omen. Who is she Celeste? It’s not a freaking omen. She forgot to charge her damned phone. What a pointless scene.

Toxic relationship.
Brady truly is in love and deep but we’re still unsure exactly where Kristen’s feelings stand, though we know she has some for Brady. It’s not often a DiMera screws up the way she did by being caught gloating about convincing Brady to move in with her to Stefano. She sucked it up and lured him back in with the truth of all things. While it was great that Kristen was able to finally spill about her time in the harem, she sure did a lot of talking yet revealed nothing. What a waste of a half hour. I wanted the dirt. I needed the dirt in order to feel for her and in order to invest in her and Brady’s future and that could have been a turning point for me. Can we get these two out of her hotel room and interacting with other people than just each other?

Cat fight?
This wasn't much of a cat fight but it was loud and Abe, who stood watching most of it, claimed to have heard nothing. How is that possible? Chloe called Abigail a hypocrite for supporting Daniel and Jenn’s relationship when her father’s body is barely cold. Incredibly classless and rude but so what if she is? What's it to Chloe and why did Abigail care so much about what someone she doesn't even like says? Abby’s skin couldn’t be any thinner and Ghoul Girl's turn to the dark side is still taking a bit of getting used to. She's more Nancy's daughter than she ever was.

Daniel knows what Chloe's up to and minutes after promising Jennifer not to let her break them up, hugged Chloe instead of asking for an explanation. It doesn't look good for Dannifer.

Cameron sheds his clothes and Abigail almost passes out at the sight.
Abigail can climb on top of a half nude Austin but regresses to a bashful school girl when she sees Cam in his jockey's? Cameron's reaction was inline with hers - does this mean he's a virgin too? I'm confused. Shouldn't the show be taking on rainbow parties and shag band storylines? Let's get into the 2000s at the very least.

How do you feel about the state of the show currently? Whether you agree or disagree with my opinion, I'd love for you to leave a comment and vote in our poll: Thoughts on DOOL?

Take a look at our interview with DOOL's Meredith Lynn Scott who plays Chloe's pal, Anne. She tells us, "I think Anne would date or have sex with anyone if she knew it would upset Jenn." 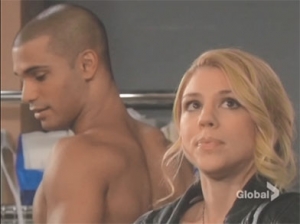 Still another tepid week even though emotions ran high, there was a cat fight in the square, and blackmail and manipulation went on behind closed doors. All that and I can’t manage to connect to our beloved characters of Salem, nor am I able to drum up much interest or related to the storylines. What’s going on with “DOOL” and when will we get our favourite soap back on track.

The couple that plots together stays together?
Neither Sami nor Kate trusts Nick because it takes a cray to know a cray. Even though she’s right about Nick, Sami did deserve a tongue-lashing for badgering Gabi from him. Anyone would have defended his partner, twisted or not, but it was a nice touch for Sami to turn the tables on the bigot knowing about what Gabi did last summer. Sami can scheme better than half of Salem and now that she has a DiMera in her bed, Nick should be doubly worried. Course, they should too, considering who Nick is and that his prison buddy’s out on parole soon likely with a score to settle. If he does something to Nick, Samanther and EJ could be suspect.

I’m not sure what Will is going to do about this mess with Nick blackmailing him but I do know one thing. He shouldn’t sign away his rights to his daughter. EJ must be able to find a way around this… by Monday!

A rocky start?
EJ told Rafe that he and Samanther had a “rocky start.” That’s what EJ calls six years of tormenting each other with the foulest behaviour. A. Rocky. Start. Talk about minimizing. This isn’t the best way to get those non-EJami’s invested in this couple.

Will spilled his secret.
In a strange twist, and so unlike what his mother would have done, Will told Sonny the truth about shooting EJ – and Sonny didn’t run away. When in soaps does this happen? It’s a nice change of pace in a reunion which is very telling of how much these two guys love and believe in each other. Just in time, too, because uber naïve and maybe a little dim Will needs Sonny’s brains and feistiness on his side.

Perfect Father Eric.
Father Eric was attacked – almost murdered twice, and yet he forgave Kevin and got the guy some help. I don’t get the point and don’t care. I’d rather know where Bo ran off to and why Hope’s being so secretive about it. And those scenes only made Eric seem even more judgmental to his own family than some random addict who tried to murder him not once but twice.