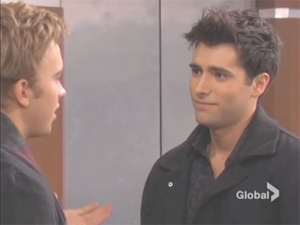 Has Sami met her match? (NBC)

This week we’ve the usual storylines being featured, a little drama and humour interspersed, but we’re still no closer to learning where Bo’s been. Some observations…

Afternoon delight.
There were no bells or whistles for Kate and Rafe’s mid-afternoon sex romp which was how it should be for two people who don’t have a need to or want to discuss what their bedroom antics mean. It’s refreshing. I guess they each got a taste of something they liked, but boy was the scene short.

Lucas, Lucas, Lucas.
Maybe Lucas needs a little ‘something something’ to take the edge off. We’re seeing a little too much bitter Lucas and not enough humourous Lucas to balance this guy out. He’s into everyone else’s personal business trying to protect Jenn and Sami, but went way beyond being a protective brother by telling Daniel that Jenn doesn’t want him in her life. Jenn got it from all sides with Lucas’s rant and lie to Daniel and then Chloe informing her she and Parker moved in with Danny-boy. The one person she didn’t get it from was Nicole.

In love already?
Nicole jumped from a lusty attraction to love, all in a week for Father Eric. Is it just a transfer of love for Daniel, and was Daniel just a transition from EJ? All week Nicole was trying to get the priest out of her naughty fantasies. It didn’t help that she bumped into Nu-Sydney – who incidentally looks as though she could pass as Nicole’s daughter, not Sami’s, which in itself is exceedingly interesting. Nu-Syd’s adorable. It took a bear hug from her to remind Nicole not to hold on to people so tight and then EJ who is sometimes civil and other times spiteful to her, gave her that last shove she was looking for to leave town. I’m not sure why she cares what EJ of all people thinks and I doubt she’ll leave after walking in on the robbery.

Chloe ramped up her game.
Chloe finally came up with a decent scheme to get Victor to give her the boot. She was pretty funny ranting at ole Victor about duct neglect, and blah blah blah but the joke was on her. Now she has to live at Daniel’s place without him. Course, Maggie, her oversized hairdo, and Jenn saw right through it as well as Daniel, but what’s a guy to do – kick his kid and the mother of his kid to the curb? What planet is Jenn on asking him to cut all ties with the mother of his child? That’s not Jennifer! She must be terribly desperate. Don’t these ladies know that there’s nothing you can do to stop love? I don’t know that it’ll happen for Chloe and Daniel but with Jenn and Dan being at odds; it sure makes it easier for Chloe to get her claws into him.

Who snickered when Chloe accused Jenn of having no charisma?

Who does Daniel belong with? Vote!

Hold on tight to that mistrust.
John was downright cold to Marlena on the phone yet in spite of his rudeness and unwillingness to give her a chance, she kept her head held high and got the upper hand with Kristen. This turn of events made for some fun scenes with Kristen going off the deep end in her motel room.

Rhymes with Nick, starts with a P.
Rafe was right to tell Nick that starting a marriage based on lies of omission is the worst thing to do for him and Gabi and Gabi’s too young to realize what this union is going to cost her. My issue with Gabi is that she has heard anti-gay comments coming out of Nick’s mouth twice now and has brushed them off. Love really is blind in Gabi’s case. This isn’t out of character though. Her inability to see reality has shown itself a few times like when she faked her own stalker and allowed Andrew to kidnap Mel. What’ll be her next trick?

Gabi's been stressed out, tired, and as Kayla said, dehydrated, so we can't blame Sami solely for Gabi's contractions, though it still doesn't bode well.

WilSon.
It was plain to see how much Sonny still loves Will when he rushed from the cafe still in his apron to support Will, and it was a nice touch to have Sonny find the letter addressed to him from Will, talking about second chances. I smell a reunion next week.

Resident virgin.
Abby dropped off dessert to Cameron and nurse Britney took it saying she’d give it to him. "It’s the least I could do after accusing him of sexual harassment." What the hell? Who says that?

Check out Matt’s Matt’s SOF Musings. A taste: "Abbigate continued to fizzle as she confirmed for Dr. Doogie that her chastity belt was still intact."

Days of our Lives Video: Back Off...