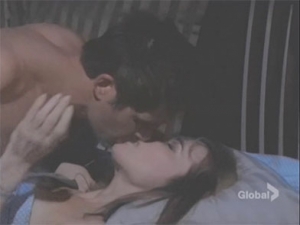 Is the priest into Nic? (NBC Universal Inc.)

Another lukewarm week went by with Nick’s constant promises to take care of Gabi and her baby forever, and Hope calling Jennifer “cuz” all the time getting tedious. The biggest surprise of the week was a nude Nick kneeling on Gabi’s bed with a heart pillow strategically placed.

Ejami fun.
These two provided a little light-hearted fun this week what with Sami jumping around after finding that magnificent diamond ring in EJ’s pocket while looking for a pen. Wait… who does that? Pens can be found in the kitchen, office, anywhere but a man’s private coat pockets. How would she feel with EJ going through her handbag? That left a bad taste in my mouth, though it was still cute to see her jazzed up, waiting for a proposal. When she and her Wilma Flintstone hairdo finally did find the ring on her desk and he asked if she liked his proposal, I realized he wasn’t planning on asking her at all and by Friday, so did she. How embarrassing, but at least he didn’t seem too put off.

Allie and EJ’s interaction was very stiff. She was shy toward him. Hopefully there’s a point to this that will be played upon sometime in the future because it was very queer.

The pawn’s spawn.
Though Brady insists he can’t marry Kristen because he thinks she’ll die like Ari and Madi did, I think Kristen’s manipulations are slowing working. It’s a bit of a mess, what with Kristen falling for him and second guessing her revenge. I’m still unsure if a pairing between the two would work or not.

Father Eric and the vixen.
It’s clear now that we’ve seen them kissing, that there is sexual chemistry between Nicole and Father Eric but he needs to lose the little boy lost and weak routine in order for me to get on board with anything other than friendship between them. Besides, he’s a priest. Bleh! Kristen’s right. Nic shouldn’t go there. Speaking of friendship, it makes sense that Nicole can’t reside at the convent and go clubbing but why would she lose Eric’s friendship over it? He comes off as a little manipulative even if by chance he doesn’t mean to be.

Dan, Jenn and the troublemaker.
Daniel and Jenn’s argument over Chloe was pretty exciting. Their pain over being on opposing sides over Chloe could have been avoided if they knew how to communicate. Shame these two can’t keep their chemistry flowing when they’re not angry. Though Daniel’s not easy to read at the best of times but it did look as though he and Chloe bonded a little over Parker. If Chloe plays her cards right, we could see a reunion and frankly, I’d prefer that to him staying in dulls-ville with Jenn.

Kafe! Kafe! Kafe!
First, let’s get this out of the way… Did Rafe say “sh*t” on Tuesday’s episode? I rewound it three times and that’s what I heard. It was pretty funny. His whole scene was hilarious. They should always write Rafe as comical. The actor shines in comedy. Unfortunately, the spoiler about Kafe was leaked too early and many were assuming that it would be “gross.” Puzzling. There’s no monumental age gap. Both are single and attractive. Both are in rebound mode so why not take comfort in someone’s arms? They both know the game. They’re adults. Also, it was a nice slap in the face to Sami and Stefano, which was the cherry on the top. I’m not sure if this is supposed to be going anywhere or if I care either way but I’m going along for the ride. They were a lot of fun and had an easy banter but of course they were drunk so let’s see if they can pull it off sober. She could use a friend like Rafe to balance how stiff she is. Just look at her the morning after – her expressions were unexpected – all that hair tossing and fidgeting with her sheet… She was genuinely taken aback and coy!

For one of the most unlikely couplings we’ve seen in a while, I think I like it. If it goes nowhere, then it was an amusing segue to these two becoming allies.

Poor Chad.
Chad was almost in tears while opening up to Kristen on Valentine’s Day about his regrets with losing the two women in his life. Worse, self-centered Kristen, one of the few people he can confide in, took off after he opened up. Ouch.

WilSon.
The first time Sonny returned Brian’s attentions, it was obvious that it was out of vulnerability and hurt. It was hot and all but him accepting a date with Brian doesn’t fit with the perception I have of who Sonny is. That means the writers haven’t delved into his psyche enough to explain who Sonny is enough for me to know either way. Still, chemistry was hot once again for Brian and Sonny but I felt some heartache for Will and Sonny while he and Will were listening to music. I’m not sure what to say about Will just giving up on Sonny so fast. Sometimes they’re both not easy to read.

Cabigail.
At least they weren’t discussing gluten on their date but this time Cameron and Abigail had a second exciting date for two 70 year-olds. Poor Abby almost had a canary when he learned she was in the ‘golden circle’ club. It sounds naughty. And what a way for him to find out what the club is by unwittingly "sexually harassing" a nurse at work! I’m not sure why Abigail’s keeping it a secret, since it's nothing to be ashamed of and she was president of the club. I hope there is more to this story than meets the eye because it’s a bit of a dud so far to me. What are your thoughts? Vote! Abigail's virginity storyline.

Check out Matt’s Matt’s SOF Musings. "Meanwhile, for reasons I fail to fully understand, Kristen thought that getting rip-roaring drunk would be the perfect way to convince her recovering addict boytoy that they should be together until they are no more than lusty dust. It wasn't. He loved the pants off of her, even if he didn't want to marry her and bring the doom that would inevitably follow."

Days of our Lives Video: I Canꞌt...