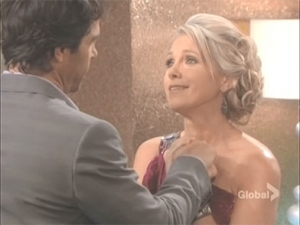 We saw a truckload of the Sami, Kristen and Daniel show this week and the theme of the week was putting others “on notice.”

John set the mood for the week.
John dropped by on his brother Stefano in the Italian version of the DiMera mansion, to call him “Papa” and put him “on notice.” He hasn’t bested Stefano yet, but he’s still somehow confident that Stefano is shaking in his Italian loafers. He’s delusional.

Sami and EJ:
The kids were once again conveniently on a sleepover, so Samanther asked EJ to have their own sleepover. After six years, the sexpectations of them being together now that they’re both in love were high. Thoughts of orchids falling from the sky, sparks flying out of their ears, violinists magically appearing out of nowhere and better lighting were in my head. Instead, everything was downplayed. Even Samanther’s post-sex profession of love was rather anti-climactic. All that jibber-jabbering after “I love you,” was unnecessary and sort of ruined it for me: “No, that’s not right. I mean I do but what I should say right now is that I trust you.” Shhhhh! They both decided to keep their affair private – maybe for the children’s sake though they never did say, yet both went directly to their siblings and blurted it out! While EJ got Kristen’s support, Brady – who has been offended at judged for dating Kristen was incensed. The siblings lambasted each other for the mate of their choosing which was really funny but it was asinine for Sami to say, “Every relationship has its ups and downs,” in regards to the awful things she and EJ have done to each other over the years and they’ve not really had a “relationship” so I found the wording a little odd. I’d have far preferred her to come up with something about forgiveness rather than act as if it’s normal, but then again, since neither EJ nor Sami are normal, I suppose her reaction makes sense! I do hope we’re in for a fun ride with both of them being devious. I’d hate for EJ to stay too straight and narrow because we already have a Rafe.

Rafe and Sami’s knock down drag out fight.
Rafe finally showed how much he’s truly hurting. This was a very real bitter and venomous battle – really well done. It has to hurt that Sami moved on so fast with EJ when he thought they’d be together a few short weeks ago. Rafe assured her his anger doesn’t stem from jealousy but because he fell in love with a woman that doesn’t exist. This may have been the best line of the week and he’s right. He did. Not only was Sami trying really hard to be what he wanted when they were together, Rafe encouraged it. Similarly to how Sami told EJ that he has finally become the man she thought he could be. It’s one thing to want to become a better person but we can’t change people and people like EJ and Sami don’t really change that much.

Love triangle.
It’s disappointing that the only thing they’ve got Chloe doing is stirring up trouble for Dannifer. So far it’s not helping me get invested in Dr. Tan and Her Royal Hortonness mostly because Jennifer’s been about as exciting as a piece of driftwood lately. Chloe and Daniel were good together once but she’s stepping over some pretty big boundaries and crying wolf which isn’t endearing me to her, either. Isn’t Daniel the least bit curious especially now that he has a child of his own, about who his biological father is? Unless his biological father is the man who raised him. Read Nadia Bjorlin’s interview to find out what the actress has to say about Chloe’s strained friendship with Nicole, what Chloe really feels, and what’s to come with Nancy’s return.

Like mother like daughter.
Abby got dressed down and buttoned up tight to go on the worst date in the world with Cameron, where they waxed philosophically about how ‘gluten makes food taste good’. What? Right away I can feel the pull again to reunite her with Chad!

Meanwhile, back at the rectory...
Kristen told Brady she loves him – to death. That’s a little ominous. She's really pulling out all the stops to get Brady to accept her marriage proposal but hasn't she given any thought to the fact that his fiancée died last year? It can't be easy for him to move on to marriage agin even if his family gave them their blessing. It looks like Kristen has a little respect for Nicole after her attempt to break her and Brady up but where she gets the idea that Nicole is into Eric is beyond me, because we as viewers haven’t seen this yet at all. What is Nicole supposed to be getting excited over? He’s a priest! He’s also about as dull as Jennifer Horton and so far there's no chemistry between Father Eric and Nicole. Vote! Do you want Nicole with Father Eric?

Young innocent William stewing.
This naïve version of Will is driving me a little batty. Thank goodness he has Sami The Shark to defend him. He’s going to need her. How is it that he hasn’t told a single person about Sonny and Brian? Did it seem as though Sonny was about to make up with him when he learned the real reason Will was going to dump his kid? I’d like to have seen Sonny torn about that one – feeling honoured that Will cares for him that deeply but also outraged that he could dump his own child for a guy. Maybe I’ve been seeing too much of Jenn’s strong moral fiber lately but it could have been a much better scene if there was a little emotion put into it.

Nick’s vendetta against the "gay boys."
Gabi being completely blind to her fiancé hating on her best friend for being gay is getting old. Maybe it’ll come out that he’s still married to China and he won’t be able to marry Gabi. It’d be nice to see a twist in the paternity test – like if we learned Andrew or someone else was the baby daddy instead of Will. Hey, it could happen! Or maybe that guy who stabbed Nick will get out of jail and find him!

Did everyone enjoy Chandler Massey's brother, Christian Massey as a young 14-year old Will?

Check out Matt’s Matt’s SOF Musings. "When they [Anne and Chloe] failed to hunt them [Jenn and Dan] down, the diva suddenly noticed that Parker was severely ill. Luckily she'd arrived just in time since Maggie hadn't even noticed."

Days of our Lives Video: Pushing...