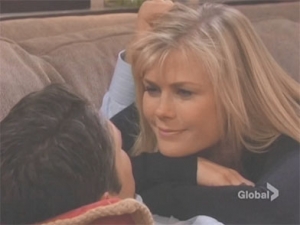 What's next for Kate? (NBC)

Aside from thriving on their need to gossip about matters that didn’t concern them, we saw a lot of bickering this week between Salemites but nobody really had much else to say except Sami, who had a lot to say. Between EJ and Sami and Daniel and Jenn, the romance gave us some much needed balance. Let’s break things down.

Scooby-Doo and the Gossip Mongers:
Hope came up with an idea for Jenn to ask Scooby-Doo on a “sexy” date for hot chocolate and marshmallows in the (very private) park. Yeah. This is why Chloe thinks she has a chance with Daniel but her ideas aren’t that much better. Showing up half naked at Daniel’s door is such a tired old attempt to make Jenn jealous. At this point I can’t see any of Chloe’s attempts to derail the Dannifer romance working.

I have a confession. I don’t think I much care for Father Eric. He’s almost as judgmental as his twin and not what I want to see in a priest.

I agree with Brady. Kristen is jealous of Nicole. Kristen’s already in too deep with her feelings for Brady but wait until he clues in to what she’s all about. The tables will surely be turned.

Salemites have lost the art of scheming!
Nicole’s plot to plant Titan documents on Kristen’s computer was the most obvious and embarrassing sham of a scheme I’ve seen to date. I blame her work at the rectory for messing with her juju. Chloe and Anne are just as bad. As villains, they’re not even fun to hate. They’re just really annoying.

Kristen and Roman’s scene at the pub seemed pointless. Does that mean it really was? I know nothing but can’t help but wonder why we’ve seen nothing of Roman for weeks and when we have it’s with Kristen. I could be reading too much into this!

It struck me that it was never revealed why our resident mama’s boy, and Scooby-Doo imitator showed up at Maggie and Victor’s place so I have to assume he was a plot point to ensure more than one person saw Nicole’s suspicious behaviour while seated at Brady’s computer which coincidentally housed the confidential Titan documents. Nicole could be in trouble.

Kate and Billie’s scene was rather anti-climactic. Underused Billie did the right thing by quitting MadWorld. She’s better off away from such toxicity, but will this drive Kate into a downward spiral?

The lost and the lonely.
Always getting into some trouble, Nicole has really become the Lindsay Lohan of Salem. Blaming Henderson of all people for stealing those sensitive files was asinine though rather amusing. Her whole scheme to get Brady away from Kristen was preposterous and a little insulting. Nicole’s not that stupid. She can do better than this! I suppose when a scheme is coming from one’s heart instead of their head, it’s doomed to fail!

I liked Rafe and Hope’s easy scene. There was no drama, no yelling, and we even caught a glimpse of how Hope’s feeling about Bo’s absence. Intriguing.

Marlena did the right thing coming clean with Brady about wiretapping Kristen. Without intending to, it also planted a seed of doubt. I felt sad for her. She seems so lost and lonely without John.

The six year wait for Ejami fans has come to an end.
Ejami fans everywhere are doing a collective happy dance. After years of waiting, they finally got their wish. Sami gave up on fighting her feelings for EJ. She put it all out on the line except she didn't tell him she loves him. What gives? When will she finally say those three little words and what comes next for these two? Vote! What’s next for Ejami?

The WilSon break-up is becoming poignant. It's making me feel more invested and when they do reunite, it’ll be that much sweeter. This is what we've been missing with other couples on the show. The slow build and the major issues that really make us wonder if the couple can overcome all odds. I like Brian and it's a shame the writers chose to throw his character under the bus by having him take advantage of Sonny’s vulnerable state. The kiss was hot but they've so few friends their own age as it is, it felt like a letdown. I'd rather have seen Sonny kiss someone we didn't know.

Chad got off lucky with Will, who didn’t take any convincing to forgive him. Will’s got to be the most forgiving person in the entire universe. I gather this has to do with having a mother like Sami, who messes up daily. I think I’d have preferred to see a big blow-up which finally ended in Will accepting Chad’s apology.

Romance in the afternoon.
It's been a difficult week so the romance was a welcome reprise from the bickering. Daniel and Jenn finally made it to the bedroom but of course Chloe had to worm her way in.

Rafe declared for the second or third time that he was done with Sami. I felt for him. It was only a few days before that he and Sami were starting over. He seems at peace with it while Sami, who never has trouble moving from man to man all but forgot Rafe's name. Ouch. She and EJ basically confessed they always knew they were meant to be together, but that's not the story some perceived all these years. Still, it was romantic, yet I still wanted Sami to finally say, "I love you." It doesn't make sense to me why she'd delay when it's easy to see she feels it. I guess - I don't know. I don't trust the writers writing romance for any coupling so I'll just sit back and enjoy the ride.

I'm not sure why, but I was surprised Sonny didn't have sex with Brian. I should have realized he wouldn't but Brian's very charismatic. As I've said before, Sonny's got some crazy willpower. It looks like we're in for more heartache for WilSon because of Brian intimating to Will that he took Sonny to bed.

It's a slice of life.
We’re missing out on the slice of life bits that make the characters relatable. Wouldn’t it be nice to see for example Rafe taking up painting, Nicole taking spin classes in order to stave off any belly flab from her pregnancy? What about having one of the mature women like Hope going through peri-menopause or Maggie and Victor taking in a movie and arguing about whether or not it was any good?

Check out Matt’s Matt’s SOF Musings. "She decided to scheme her way into breaking up Black and DiMera. That flopped as gracefully as a bowl of chowder spills onto a cockerspaniel's head."

Days of our Lives Video: Confronting...