Nicole Walker’s word is anything but reliable or has she turned herself around? Her personal highs and lows have always been dramatic, but whatever lessons she’s learned aren’t as motivating as her quest for self-preservation and her loyalty to a cause. Now that Nicole is tied to the church – in a manner of speaking – you would think some of that peace and goodwill would rub off?

But temptation lurks around the corner potentially putting someone’s vows in danger of cracking. Will they survive the test?

Eric Brady’s history with Nicole is as passionate as his current love for the cloth. But before he made his vows to the church, Eric was a happily secular Brady sibling, albeit a little conflicted, if only for a minute, when he helped Nicole break her wedding vows.

Do you remember who Nicole was married to when she cheated with Eric? Vote in the poll and comment below.

Test your Port Charles knowledge and vote in the GH Poll: Max and Diane.

Days of our Lives Video: Planning For The Future

Days of our Lives Poll: What Is Next For Ejami? 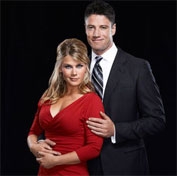