"How’s it going Granny?"
It was so easy for Nic Nic to press Sami’s buttons because Sami was a little vulnerable. Nicole should have called Sami "Kate" instead and watched Sami’s head spin 360 degrees and then blow right off. Sami was so preoccupied with Will that she really didn’t get any good barbs in there. She must have been saving them all up for Rafe. Like Chloe and Nicole, Rafe and Sami said things that I’m not sure can ever be taken back. We’ve seen Sami blow up to Rafe about Gabi and to EJ about Kristen but the men's reactions to each dressing down felt as though they had swapped brains. Rafe is usually the voice of reason while EJ’s more volatile. Of course this makes it easy for Sami to run in EJ’s direction. Do you think Sami will really take Lucas’ recommendations to stay out of Will’s love-life and try to get on good terms with Gabi and Rafe?

WilSon:
These two being apart is hopefully going to give Sonny more layers. Wounded, Sonny shuffled through the week in a coma. All he could say is that it felt like "forever-ago" that he was with Will. He perked up a little during that passionate kiss Will laid on him. He could teach Sami a thing or two about willpower and level-headedness.

Adrienne showed her true colours concerning her feelings for Will being with her precious son. Why did she go to Sami to bellyache about her son’s pain over Will’s lies? The mothers need to stay out of their adult children’s problems. They should take their cues from Lucas and Justin and let the guys figure out their own love-life.

Separated.
John and Marlena's bittersweet goodbye was quite poignant. Marlena could have easily blamed Brady but she took sole responsibility. Will she come clean with the real reason John's at odds with her?

Check out Matt’s back story on how Anne and Chloe know each other in this week’s Matt’s SOF Musings. 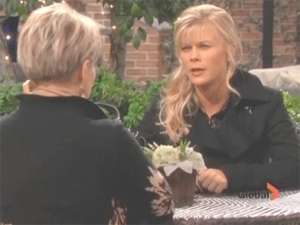 Credit: Out with Rafe; In with EJ. (NBC)

It was a short week filled with contention. Blake Berris continued to blow everyone away with what he’s doing with Nick, which is evident by all of the ‘hate Nick’ threads in the forums, Rafe vowed he was done with Sami and we believed him this time, and all the while Gabi and Will learned they’re having a daughter. That means it’s time to vote. Help Gabi and Will name their baby.

What trust.
Daniel acted in a surprising way twice this week by being so protective of Chloe and jumping to conclusions thinking Her Royal Hortonness of all people would call CPS on Chloe behind his back. Is this a taste of what’s to come for Jenn? Anne and Chloe’s satisfaction over their ridiculous plot to separate Dan from Jenn was laughable. Someone should tell Chloe she should have went to a DiMera for a real scheme in her quest to break up Dannifer.

Will’s enthusiasm…
It was good to see Will as giddy as a school girl after things became more real during the ultrasound and confirmation of the child’s sex. He even succeeded at bringing forth my excitement a little, which if Nick gets what he wants, means it’s about to hit the fan, because nobody can be happy for too long in Salem.

Has anyone noticed that Nick only likes Gabi?