Another DiMera town pariah, Chad, was the big talk around town. Sure it wasn’t Chad’s place to out Gabi and Nick’s lies and blah blah blah but truthfully, I just don’t care in this situation. At this point, I can’t wait for Nick and Gabi to get what’s coming to them. I’m even cheering for Chad. Are you? Vote: Are you rooting for Chad or not? Good thing he has the DiMera’s backing him because Nick’s a formidable opponent. He’s really been showing his true colours with his obsession with Chelsea... I mean Gabi.

New great-grandmother Kate kicking Nick while he was down was no surprise but what kind of business woman is she if she doesn’t put her emotions aside and delay any big decisions until after she had a chance to think things over and learn the facts?

Sami’s merry men:
Sami and Rafe acted alike in one respect. Each jumped to defend someone before hearing the entire story. No wonder these two can’t get it together. Rafe went into shock after finally seeing “Sami’s true colours." That’s got to hurt. Enter EJ. He’s there to pick up the pieces and didn’t have to scheme to do it. He should send Gabi and Nick a fruit basket.

WilSon?
There was a rare EJill sighting before Will gathered the courage up to apologize and try to explain his betrayal. It's a pretty big lie but I have faith that Sonny will forgive Will. Will thinks things are tough now. Wait until Nick blackmails Will with what he heard Will and Lucas discussing. Oh boy.

And that was just Monday...

Marlena’s marriage took more of a nosedive at the end of the week.
John can’t just move to a guest bedroom, nor can he just move into a hotel for a while. No he has to leave the city to get away from Marlena because she has trust issues with him. Ouch. Doesn’t he have trust issues with her? Shouldn’t he stick around and try to work things out? Isn't he worried that Stefano will strike if he leaves his Doc alone for five minutes?

Kate wants to out Chloe as a prostitute in order to what... call her an unfit mother?
How would that make her unfit? I like how Kate’s reasoning for selling her body were oh so pristine yet Chloe’s reasons were self-serving. Ridiculous. Kate’s kids turned out fine for having a mother who sold her body when they weren’t around. I’m not sure Kate can touch her unless Daniel makes a big stink if he finds out Kate was the blackmailer. It’s not like she has Stefano or Victor to back her up on this one! I've got to say Chloe and Anne are more devious together than I had imagined. I'm enjoying the drama.

The big pay off.
It was revealed (we knew!) that Kristen paid off the muggers to beat on a Black but we didn't know it was for John, not Brady. Kristen actually looks as though she's starting to have some feeling for Brady.

Burning question of the week: Why was Roman at Kristen's place when Hope said he was out of town? Is Kristen's getting romantic with him as part of her plan to take everything from Marlena? 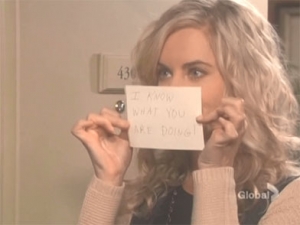 A lot happened this week so let’s get right to it.

Gabi’s Fairytale Wedding.
I must confess that I was floating on a cloud of schadenfreude (Ironically, I wrote this before Marlena said it on Thursday’s show!) when Gabi’s “perfect fairytale wedding” was broken up by Chad. They should have gone to the JP instead of being big ole hypocrites and taking their lies to the church but whatever. This is a lot of stress for pregnant Gabi. Could she lose the baby?

Sami was quite possibly the biggest hypocrite she has ever been in this situation. Gabi didn’t have to drug Will to sleep with her and she told him she was pregnant right away. We all know that Sami did this twice and dragged it on for years. One would think she would sit back and ask questions instead of being so quick to judge Gabi’s motives but we know how self-absorbed she is so she was likely thinking that Gabi’s reasons for hiding the truth are identical to her own.

Officer Hernandez, much like Sami, was so quick to jump to conclusions. Catholic Officer Hernandez belted Chad in a church as any good upstanding police officer would do and then Detective Hope Brady of course arrested Chad, not Officer Hernandez but Chad, for disturbing the peace but not Officer Hernandez for assaulting a civilian when the officer threw the first punch. And this is how Hope claims she was trying to save Rafe’s career. How would that have worked? Dirty cops. Classic “Days” writing! It didn’t stop Monday. The rest of the week, the cop continued inattention to minor illegalities by encouraging the fine upstanding citizen and psychiatrist extraordinaire Doctor Marlena Evans to wear a wire in order to catch Kristen in her lies about how she is using Brady. Course it didn’t work because Kristen is a DiMera and probably smelled the scheme coming through Marlena’s skin when she stepped off the elevator on her floor.

Days of our Lives Video: Kate Plays A Card

Days of our Lives Saturday Teaser Poll: Walking In