Two of our favorite Primetime shows - "Revenge" and "Pretty Little Liars" - returned this week. If you missed their first episodes of the New Year, you can catch up with Soaps.com's Revenge recap: Power and PLL recap: She's better now. 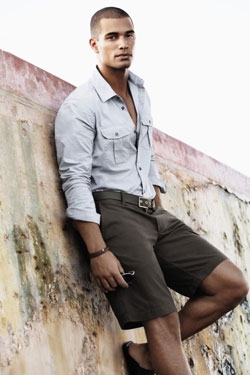 “I’d like a little edgier Cameron to come to life.”

Could it be we are going to get to know a little bit more about the good doctor Cameron Davis? The role was recently taken over by Daytime newcomer Nathan Owens, who spoke with Soaps.com about stepping into the character so soon after Schuyler Yancey’s departure. His first big acting gig, Owens expressed he isn’t scared to show the fans a different side of Cameron – once he gets used to the hectic pace of life on the set of “Days.”

Soaps.com: Congratulations on your new role. How were you were first approached about coming on to the show?

Owens: My manager actually contacted me and said, ‘Hey, ‘Days’ wants you to read for Rodney.’ And I was like, ‘Let’s go for it.’ Sure enough, I went in there and saw a bunch of guys in there, and this was my first acting job, so this is all new to me. And there were about 10-15 other guys in there and everyone was nervous. And I get to it and I worked with Marni, who is in charge of a lot of casting and we went through that test probably about five times together in that one sequence and she called me after I left to see if I was interested in coming back to work with her again in a few days. And I knew obviously something good had happened. So I went back a couple of times and after that we met with the producers. And after that I did a test with Kate Mansi [Abigail], who was the first person I did my test with on the show on the sound stage and it was kind of surreal.

Soaps.com: Were you nervous stepping into this role so soon after Schuyler’s departure?

Owens: I was, for a few reasons. I knew people had probably developed relationships with him and I did not want to step on any toes. It can be hard to acclimate to somebody new when they are kind of forced into it, but I tried to play that as gently as I could. As far as the character, I was nervous I wasn’t going to be as well received as he was. That was my first fear, but that is just fear No. 1. Trust me, there are plenty more.

Soaps.com: So what was your first day on set like?

Owens: It was a madhouse actually the first day because it was the Christmas episode and practically everybody was there as far as cast members go. So many scenes were going on, and there were scenes in between scenes and the director was busy and people were kind of like, ‘Who is this new guy? Oh, you’re Cameron.’ So there was a lot of that going on and actually, the wardrobe almost forgot about me. They were calling me to my scene and I had no clothes to wear for it and was torn about going up to do the scene in my street clothes. Everyone was apologetic about the busy day. All in all it was a good experience because I like to be thrown into it and figure it out. And everybody helps me along the way too as far as cast members go.

Soaps.com: What do you hope to bring to the character?

Owens: I’d like a little edgier Cameron to come to life. Not necessarily mentally unstable, but a little more edge to him would be interesting to explore.

Soaps.com: What are some of the good experiences you have had so far with the cast, and who would you like to work with?

Soaps.com: is there anything you want “Days” fans to know?

Owens: Stay tuned, because it will get interesting. That is for sure and I can promise them that.

Days of our Lives Video: The Big Day

Days of our Lives Saturday Teaser Poll: Not Friends For Long?