Alzheimer’s.
I can’t say enough about how much I love how "Days" is writing Caroline’s Alzheimer’s story. It’s great to see her sunny attitude about such a tragic disease shine through and hopefully she won’t progress too quickly.

Ridiculous John.
What the… either John’s overreacting or he has another agenda. Half of Marlena’s insecurity is due to the way he reacted to her claims that Kristen wasn’t who he thought she was and yet 'he' is the one moving out to 'think' about things? He should take some responsibility and she should kick his arse out if anything.

Rafe’s confidence... overconfidence?
Rafe has accused Sami of sending him mixed signals but isn’t that what he’s been doing? The day he came upon her ranting about Brady and Kristen, he compared her to Kristen and then asked her why she’s so angry about something when she can’t change it. Good point but she just found out about Brady and Kristen so Rafe could have cut her a little slack instead of comparing her to Kristen which had nothing whatsoever to do with why Sami was so upset. It’s like he didn’t even hear her. He missed the entire point. She’d have been better off talking to a woman about this who would give her feedback. I’m not really sure what point the scene was making – that Rafe sometimes treats Sami like a five year old (can't blame him too much) or that he’s above fuming over other people’s issues or what? And it hasn’t gone unnoticed that both Rafe and EJ have declared their love for her but she has said nothing in return to either. Very telling. Wait until Sami hears the news about who Gabi’s child’s father really is. Will Miss Substitute Mother turn on Gabi, therefore leaving her and Rafe at odds? If that’s the case will Sami go with the man behind door two?

Why bother?
So many don’t care about Gabi or Gabi and Nick and Momma Hernandez doesn’t even exist to us viewers. She’s a die-hard Catholic who was against Gabi’s pre-marital pregnancy and five minutes before Gabi walked down the aisle, suddenly Momma Hernandez decided it was a blessing? Whatever. It’d really been interesting if she would have shown up in Salem to cause trouble!

Take a look at Matt’s SOF Musings. A taste: "After dating for a little over a month, Sonny asked Will to move in with him. He even cleared out half of his closet for him. I'm sure there was supposed to be a joke in there somewhere." 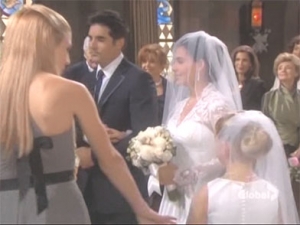 Happy New Year! I’m back and so is the diva. It’s easy to tell Chloe’s back in town because the words slut and whore are once again interspersed throughout Kate and Victor’s dialogue. The storylines are still being told at a pretty good pace but we’re still all about kids and love triangles. Big relief for fans was word that show was renewed for one more season.

Chloe.
Chloe drove all the way from Chicago to Salem to s l o w l y tell Daniel that Parker’s his son and she forgot the most important thing in her car. The proof. Even though PhillyK got another DNA test, I say Daniel should do about five more himself, just to be on the safe side.

Kate learned the big news and rushed home to bang on Chloe’s door to beg for a crumb of Parker’s time but Chloe refused her. One way to compromise would be to let Kate have supervised visits with the most adorable little guy. I know. Too boring. I’m sure Kate will come up with enough dirt on Chloe to cause issues and it looks like Chloe and Anne are striking up a friendship which should cause a little drama of their own for “Her Royal Hortonness.” That could be fun.

They brought back PhillyK, but he hid in his room and we didn’t get to share what could have been one of the best storylines of the year, his devastation. This storyline wasn’t very dramatic. What a shame. Vote! Give us your thoughts of Chloe’s return.

Poor Brady?
Boy did Brady hear it from everyone this week. I feel for him. He has such a weak mind. He may appreciate how much his family loves him down the line when he finally learns the truth and goes back on the booze and drugs. Ugh. Sami was quite supportive of her parents suddenly which seemed to me like a maneuver for her to get pissed at Marlena once she learns her mum lied to John about knowing about her brother ‘boffing’ the deliciously cray DiMera lady. At least that’s how I saw it. Kristen’s plan worked pretty well. She shoved Brady away from not just his dad but his whole family. And I realize this happened while I was away but how hilarious was it when Marlena slapped her last week? What an arm.

Superfast.
I expected that Sonny would want Will to move in with him at some point but Will has barely been out for a month and it’s been a matter of weeks since he even accepted this himself. What’s the rush and why didn’t Sami have a problem with this of all people? The writers dropped the ball on that one. It felt as though it was supposed to coincide with the ‘Gick’ wedding. Once Chad reveals the truth or Will steps up, what’ll happen with WilSon?

Days of our Lives Video: The Big Day

Days of our Lives Saturday Teaser Poll: Not Friends For Long?