DOOL Poll: And The Father Is…

Have an idea of which vet you want to see stick around Port Charles the most? Vote in Soaps.com's GH Poll: Who should stay longer?

It’s all about the choices you make on "Revenge." Is Emily making the right ones? Read Soaps.com's Revenge Recap: Power. Then catch up on the return of "Pretty Little Liars" with our PLL Recap: She's better now. 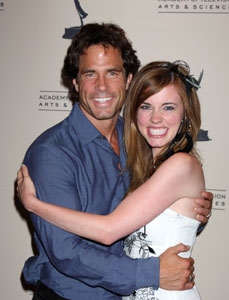 Daniel just found out that Parker is really his son, not Philip’s like everyone thought. This after yet another paternity results switcheroo after Parker was first born. In fact, DNA results get swapped so often in Salem you would think even the most wholesome person would get third-party confirmation right at conception.

Daniel is just the latest in a long line of fathers who found out long after the birth that a child was really his. After all, it had already happened to him once and Melanie was practically an adult when Daniel found out he was her real father. Makes you wonder if he will ever get to care for a baby.

So which switched results from Salem’s past had you the most intrigued? Vote below and let us know what we missed in the comments.

Days of our Lives Video: The Unexpected Father