Emily could start a dating service consisting of hot, tortured exes judging by the latest episode of "Revenge." Catch up with Soaps.com’s Revenge Recap: Power. Then get a taste of what's to come during tonight’s Season 3 premiere of "PLL" in Soaps.com's Pretty Little Liars spoilers. 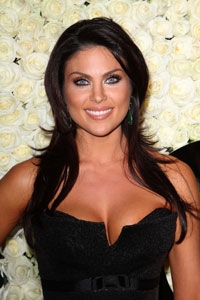 Now that Chloe is back in town she is sure to put more people out than just lovey-dovey Jenn and Daniel. In fact, Kate will probably have something to say about it considering she was ultimately behind Chloe leaving in the first place. Before her singing stint in Chicago, Chloe did time as a prostitute in Salem, initiated by some trickery on Kate’s part.

After it was revealed in 2010 that Philip was the true father of Parker, Chloe moved into the Kiriakis mansion so they could raise him together. Chloe was still unstable however, and one night drunkenly threatened Kate that she would take Parker away where no one could find him. A fearful Philip took Parker to Chicago while Chloe tried to clean up her act for the courts. She started giving voice lessons to students in Salem and petitioned – and won – supervised visits with her son.

Soon she met a handsome stranger named Quinn and after an evening together they had sex in his hotel room. After he left, she found an envelope of money and was horrified. He apologized for the misunderstanding and convinced her to go on another date. She reluctantly agreed but had sex with him again when she saw Daniel and Jenn kissing.

But Quinn was no mysterious stranger. Instead, he had been hired by Kate and had taped their time together – including her taking the money. He was then able to blackmail her. She knew the video would cause her to lose her visits with her son so she agreed to work for him. Plus, the steady money would afford her more time with her son.

But when prostitutes started getting targeted and attacked, Quinn closed up shop. Chloe was hooked on the money at this point and decided to go it alone but was brutally attacked waiting for a john by the docks. Kinsey, Brady and Nicole found her beaten and unconscious and rushed her to the hospital where she slipped into a coma.

After she healed, Brady, Nicole, and Kinsey kept Chloe’s occupation a secret to protect her image. Brady even got her an audition at a club in Chicago. She got the gig and moved there to start her new life. Philip even agreed to let her back into Parker’s life and that was the last we saw of her – until now.

Do you think Chloe’s past will come back to haunt her? Let us know in the comments below.

Days of our Lives Video: Surprise

Days of our Lives Won't Be Cancelled