Kristen Blake is certainly getting a good night’s sleep. Her plans to seduce Brady, make John go ballistic and antagonize and needle Marlena are going better than planned. A few words here, a few taunts back and forth. It was only a matter of time before Marlena launched some firepower of her own. Kristen felt the brunt of Marlena’s palm against her face as she got a well-deserved and pent up slap from Mrs. Black. But it hasn’t stopped Kristen …yet.

Who would’ve thought that a sharp right hook would run in the family?

Remember the last slap heard around Salem? Sami Brady may be in a league of her own when it comes to deception but she sure made momma Marlena proud when she promptly delivered a hard, resounding slap to Nicole Walker Layton Roberts Kiriakis DiMera. Why? Well, like Kristen, Nicole managed, for a time, to successfully steal a family member from the Brady clan – and she almost got away with it.

Pregnant with EJ’s baby, Nicole suffered a devastating miscarriage that fed into her fears about losing EJ to Sami, who was also pregnant with EJ’s baby. To keep up the pregnancy pretense, she hired a teen mom, Mia McKormick who would hand over her baby to be raised by Nicole and EJ – unbeknownst to EJ. Mia and Sami went into labour at the same time and when the babies were born, Nicole switched Sami’s child with Mia’s, essentially helping EJ to raise his own child. Mia’s child, now with Sami, was named Grace and Sami’s child, named Sydney was now with Nicole. When Grace died of bacterial meningitis, Sami was inconsolable at losing her daughter, and in her grief she shared with EJ the loss of his daughter. Little did she know that her actual daughter Sydney was alive and relatively happy with Nicole. When Rafe discovered Nicole’s deception, he became Sami’s hero. And Sami, full of anger, literally let loose on a sobbing Nicole, giving her two solid good ones across the face.

Do you remember what Sami wanted Nicole to say after she slapped her? Vote in the poll and comment below.

Test your Port Charles knowledge and vote in the GH Poll: Who Should Stay Longer.

The New Year opens with big news for Rapper Kanye West and his reality TV love, Kim Kardashian. Read all about it in Celebrity News. And don’t forget to check out Sunday’s sneak peek spoiler video in Soaps.com’s Revenge Spoiler Video: Emily With Victoria. 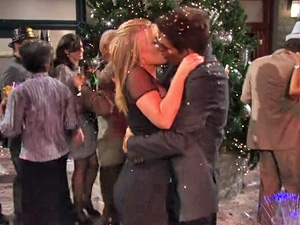