Jack was wracked with guilt over his behavior and eventually gave up his campaign against Steve and Kayla.

Would you like to see Steve and Kayla reunited in the future? Let us know in the comments below.

Visit Soaps.com’s Flashback In GH History to relive the time Sonny ran a Christmas tree lot after the owner went into labor.

Catch up on all of the Daytime New Year’s Eve celebrations in Soaps.com’s Soaps Spoiler Digest. Then get a taste of what's to come in Season 3 of "PLL" in Soaps.com's Pretty Little Liars spoilers. Season 3 - and Soaps.com episode recaps - starts January 8, 2013. 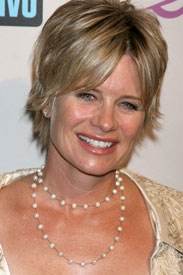 As the residents of Salem sleep off another New Year’s Eve, it is time to reminisce about the past and think about moving forward in 2013. But some memories from past New Year’s Eve celebrations are harder to relive than others.

Back in 1987, Kayla was Jack Devereaux’s nurse when he was suffering from Hodgkin’s disease. He had previously fallen in love with Kayla in Hawaii, though she only viewed him as a friend. Plus, she was already involved with Steve Johnson. But Jack did not give up his pursuit in the hopes of winning her over.

But Steve soon learned that Jack was really his long lost baby brother Billy. In order to ease his ailing brother’s pain, Steve pushed Kayla away and right into Jack’s arms in the hopes she could comfort him in his last days. And despite the fact Kayla was still in love with Steve, she married Jack anyway.

Jack made a miraculous recovery though, and Kayla found herself resisting his ever-increasing advances in the hopes there could still be something between her and Steve. Eventually Steve discovered Kayla was being poisoned and suspecting it was Jack, he kidnapped her to save her. (It was actually Jack’s adoptive father Harper). The two made love and began a secret affair they kept from Jack. They planned on letting him know after the political election Jack was involved in had passed.

Meanwhile, Jack planned a romantic evening for Kayla on New Year’s Eve, but she pretended to be sick so she could be with Steve that night. A photographer caught them kissing on New Year’s Eve and when he blackmailed Jack with the pictures, he was so angry that he raped Kayla.

When Steve discovered what had happened the two fought and Jack was nearly killed when he fell from the roof. Later, Steve donated one of his own kidneys to save his brother’s life. Despite the life-saving surgery, Jack resented Steve and Kayla and continued to harass them. Kayla ended up pressing charges against Jack and even developed a case of hysterical muteness and deafness due to the stress.