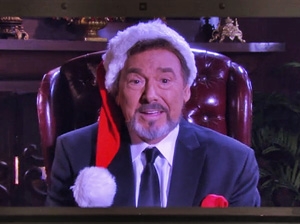 Dustin here, I’ll be blogging for Christine for the next two weeks while she’s off on vacation. With this week being Christmas, we were treated to the usual Salem traditions we’ve come to expect this time of year. This time of year also tends to bring little storyline development, as “DOOL” normally saves the big bombs for New Years.

Tell me your troubles, Father Eric.
Eric continued his mid-day half-naked naps, and it was only a matter of time before Nicole burst in on him during one of his nightmares. Nicole hysterically thought his issues stemmed from his being tempted to betray his vows with her. That wasn’t it, or at least that’s not the problem yet. Eric opened up to Nicole about a tragedy in Africa involving a missionary camp, rebels and the death of his mentor. Eric froze up during the hostile situation and he has since felt like a horrible priest. I’m sure Nicole will find a way to help Eric feel better if he doesn’t start locking his door and put some clothes on when he sleeps. I guess I was expecting something more than the story we got. However I’m definitely glad it had nothing to do with Stefano and mind control chips.

Christmas Ejamis/Safe style.
Eric presided over Christmas Eve mass in hopes of taking his mind off his troubles. Most of the town came out for it too. This whole segment seemed to be about continuing Sami’s indecisiveness about the men in her life. Just when you thought the show had settled on Sami and EJ, they have Sami questioning her feelings for Rafe again after they spent time together with the kids. However Rafe ended up feeling slighted when he saw Sami with EJ, and Sami felt hurt that Rafe didn’t show up for mass. Are we really back here again? Sami should make a resolution to pick a man in the New Year and stick with him. Fortunately Rafe told her almost as much, and accused her of liking having both of them circling about her. Apparently when Lucas told her the same thing a few months back she wasn’t listening. Now Sami is going to the big New Year’s party with EJ, and Nicole is going with Rafe. It will definitely be interesting to see who is kissing whom at midnight.

Merry Christmas from Stefano Claus!
Chad was feeling a bit blue because he was all alone and missing Lexie, so he made a bro-date with the new Dr. Cameron to spend time bonding over their dear departed sister. This is only going to lead to trouble when both men want to date Abby and she has to choose. "DOOL" is setting up another triangle, something new! Who will Abby go to the big town square party with, and will she be kissing the same guy at midnight? Who do you want to see Abby with? Vote in our DOOL Poll: The Man For Abby.

Chad, Kristen and EJ gathered to celebrate Christmas Dimera style, which meant a skype call from Stefano himself. He was so pleased that they were all getting along, and that Lexie would be happy they were all together. Frankly I would rather have Stefano in Salem than on a computer. He’s been gone far too long. Hopefully the New Year will bring him back to Salem. I definitely don’t think he’s going to be pleased with what his children have been up to, and more to the point who they’ve been up to things with. I can already hear him yelling at Kristen . . .

Kristen continued toying with Brady as part of her twisted plan for John and Marlena. I really could have done without their sexcapades on my television this week. Not only do we know Brady is going to get burned in the end, but he really should know better. I also think it’s fairly icky that he’s sleeping with the woman who took care of him when he was a little boy, the same woman that also was sleeping with his dad. What is with parents and siblings sharing sex partners on this show? A good twist would be to have Kristen end up developing real feelings for Brady, but that would mean we’d have to keep watching them steaming up our screens constantly. I’m not sure I can handle that.

An awkward Horton family Christmas.
This year’s Horton Christmas was definitely one of the more unusual ones. Sure they pulled out the Horton balls and hung them on the tree, but the non-Hortons almost outnumbered the Hortons this year. I think that’s probably why they brought Doug and Julie in, to even out the numbers. While Jen’s been moving on with Daniel, she’s also been reflecting on Jack a lot. I couldn’t help but wonder what that could mean for the future? Is she really ready to move on? Is Jack going to come back from the dead again? With Chloe soon to return, Jen and Daniel’s life is definitely about to get a little more complicated.

This seemed to be the year technology hit Salem. Just like with Stefano, Hope was skyped in to watch the Hortons decorate their tree. She, Ciara and invisible Bo were away visiting Belle, Shawn and Claire. The show really needs to just reveal what will become with Bo and be done with it. Having Bo mysteriously off the screen is going to get a bit ridiculous. Maybe he’ll be sent to pack the Brady Pub decorations away in the attic and just never come back. That’s where Max was for so many years.

Speaking of ridiculous, what was Kate doing at the Horton Christmas? I know she’s Lucas’ mom, but there is a bit of that home wrecking history there between her and the Hortons. Of course when Bill called home and asked to speak to her, well I guess we knew why she was there! Last we had heard Bill and Laura were back together. So what is he doing calling up his old mistress? I can’t help but wonder what this may lead to as Kate has been lacking a storyline for a while now.

Will brought Sonny to the family Christmas after Sonny brought him to his family’s party. Frankly both Will and Sonny, and Gabi and Nick are moving their relationships way too fast. That means they’re headed for a huge crash. The tension between Nick and Will is definitely reaching a boiling point, and frankly I hope Will comes to his senses and soon. This plan of Nick’s to pass Will’s kid off as his is horrible and I can’t believe Will agreed to it. He should know better, and just like his mom when the secret comes out he’s the one that will be burned the most. Nick and Gabi will still have each other, but Will will likely lose Sonny. That’s what aggravates me the most, that it’s a lose-lose situation for Will no matter what happens. Fortunately it seems that Will is finally beginning to realize this, and that Nick and Gabi are only doing what's best for them.

I’ll be back next week with another blog, dishing on all the New Years drama. New Years is always shocking and surprising in Salem, so I’m sure there will be a lot of fireworks.

Also, have a look at Matt's Musings for his take on Salem this week and view our Days of our Lives 2012 Year In Review.

Days of our Lives Video: Too Busy...