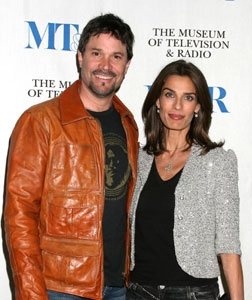 It’s Christmas in Salem, and when it comes to winter memories, it’s hard to top the annual hanging of personal ornaments on the Horton family Christmas tree. Unless, of course, there was a wedding.

When Bo and Hope walked down the aisle on December 24, 2000, it may not have been their first time, but it was certainly one of the most memorable – and not without its fair share of hitches. In fact, everything that happened that day seemed to be trying to keep these two from saying “I do.”

The couple was still fresh from finding each other again after Hope was brainwashed into thinking she was Princess Gina, and the paternity of her baby J.T. was still unknown. (It was later revealed that Bo and Hope were raising the son of the niece of one of Stefano’s men while Abe and Lexi had Bo and Hope’s son.)

But Bo and Hope were able to make it official anyway after they realized that no matter the setbacks, they always managed to find their way back to each other. At the joyous and festive celebration they smashed cake in each other’s faces, Bo took off her garter with his teeth and during their last dance together Bo told Hope that being married to her made him feel perfect.

Was this one of your favorite Salem Christmas memory? If not, let us know in the comments below.

As the year comes to a close, see if you agree with Soaps.com's picks for 2012 Best and Worst Soap Opera Storylines. Then get a taste of what's to come in Season 3 of "PLL" in Soaps.com's Pretty Little Liars spoilers. Season 3 - and Soaps.com episode recaps - starts January 8, 2013.

Days of our Lives Video: Christmas...