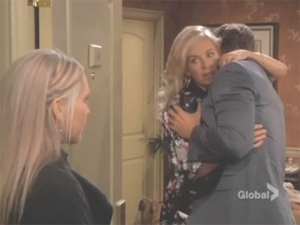 Merry Christmas and happy holidays! This week gave us a bit of comic relief, some tension and the standard drama.

Merry Christmas ‘bitch’. – Kristen DiMera
Kristen’s in the Christmas spirit – you know, visiting her brother, setting up a video chat with their father and her brothers, blaspheming with her compliments of the season, stealing needy children’s Christmas gifts, and lifting flowers from another grave…you know, the usual.

The dreaded triangle.
It almost appears as if Rafe’s giving up on Sami, while EJ’s using this time to let Samanther know that those who love him must accept his ties to his family. Sami can never make up her mind between these two so one of them has to step aside for her to choose the other. I just don’t see how she’ll accept EJ’s family if they’re together. She can barely look at Kristen without sneering. Vote on whether or not Sami can bury the hatchet with the DiMera’s if she and EJ get together.

Lord Chaddington.
Thursday Chad reminded us that he’s not just one big ball of bitterness but that he also holds his friends close to him. It was good to see him not so self-absorbed while helping Sonny mend things with Will.

Nick’s ‘gay boy’ comment.
His bigotry is showing. It’s about time this story picked up a little. Though he meant the comment as a put-down, isn’t he right? Nobody will suspect Will is the father because he is gay. Hopefully we’ll see more angst come out of that comment to spice up this storyline and have Will rethink giving up on parenting his child.

This is my last blog of the year – Dustin Cushman will be filling in for me, writing the next two blogs. I think you’ll enjoy what he has to say. I’m ending this one with a nod to the season.

Thank you for some of the finer gifts you and your elves brought us this season such as the humour on the show, EJill, Will’s coming out storyline, and Kristen. My Christmas wish is to see less repetition in the storylines. Please, no love triangles and baby storylines. They didn’t fit this year, the year before that, and I doubt they’ll fit again in the coming year. Instead, I’d like to see great writing, a reunion between Kate and Stefano, the return of Tony DiMera, and PhillyK. I’m thankful for the many drinking games over the course of the year at the expense of the words ‘Smith Island’, ‘tremors’, and the phrase, ‘who are you and what did you do with’ and when someone would stare at Daniel’s hands. If it’s not too much trouble, could you please bring Brian back?

PS. I hope you enjoyed the Moravian Ginger-Spice cookies from Williams-Sonoma.

I'd like to see your own Dear Santa Corday letters so please feel free to leave a comment below and don't forget to take a look at Matt’s SOF Musings. You're bound to find a few surprises!