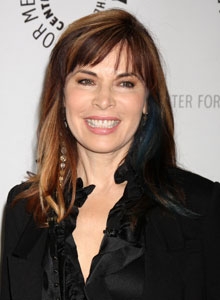 This week it was mentioned that Kate Roberts will celebrate five years of being cancer free next year, an amazing milestone. But Kate certainly had her share of battles getting back to the healthy schemer she is today, which even led to her marriage to Stefano.

In November 2008, Kate was given devastating news when she was diagnosed with Stage IV lung cancer. Daniel suggested an incredibly aggressive treatment plan that included an immediate bone marrow transplant. They needed to find a donor fast.

A search found a match in Chloe Lane. Chloe was married to Kate’s son Lucas at the time and donated her bone marrow to Kate.

As Kate healed, she noticed sparks between Chloe and Daniel, whom she had recently been involved with herself. So when Kate caught Chloe and Daniel kissing, she was set on revenge – and getting Chloe away from her precious son.

Kate poisoned some brownies and Chloe ate them and ended up in a coma. Kate planted the bottle of poison in Daniel’s apartment, then doctored a recording to make it sound as though Chloe and Daniel were having an argument. He was arrested for attempted murder.

Daniel got Kate to tell the truth by promising her a romantic reunion. She fell for it until he threatened her with a taped confession. So she knocked him out, tied him up and took off.

To save herself, Kate agreed to marry Stefano and in return he destroyed the evidence. They tied the knot on September 24, 2009 and what was once blackmail became a real deal love.

Do you think Kate and Stefano were meant to be? Let us know by sharing your comments below.

Could there be a second chance after all for "AMC" and "OLTL?" Read Prospect Park possibly putting AMC and OLTL online? Then find out what could happen during Season 3 of "PLL" in Soaps.com's Pretty Little Liars spoilers. Season 3 - and Soaps.com episode recaps - starts January 8, 2013.