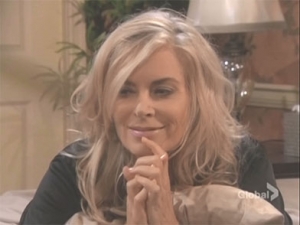 Salem saw a lot of tears this week as Nicole came to terms with the realization that Danicole was over and Tannifer was to come, and as everyone realized Daniel’s treatment worked. Matt and I almost started two drinking games. One for whenever someone mentioned “Smith Island” and another for how many times everyone looked at Daniel’s shaky or steady hands and said the word “tremors.”

Complex web of lies.
At least we finally saw a reason why hiding the paternity of Gabi’s baby could be interesting, now that Great-Grandma Caroline and Grandma Sami are planning the wedding and we learned Sonny doesn’t want children until he’s ancient – at least 40 years old. Bets on the truth coming out at the wedding? With how bitter and angry Chad has been lately I figure he’ll be hell bent on finding out what Gabi’s hiding and he’ll either blackmail her or be the one to spill the beans.

This pregnancy must be scrambling Gabi’s brains as she somehow forgot what an expert liar she is and whined to Nick about all their lies piling up! And Nick’s getting the blame for everything! How is Rafe going to treat Will once he learns the truth?

Always wondered…
Why does EJ always try to win Samanther over by being such a goody-two-Rafe when she’s no better than ‘Eeej’? It was understandable when he did this in order to win over saccharine Taylor but he and Sami are two peas in a pod. He shouldn’t have to try that hard with her. If they’re endgame, I don’t want to see EJ “castrated.” Their scheming ways should be celebrated the way Stefano and Kate’s were.

Daniel and his bitches.
Daniel’s harem is always tracking him down. He couldn’t go to the Horton Cabin on Smith Island without his girls showing up to “give him space.” Does he really want to be with Jennifer knowing that he’ll have no ‘man cave’ if they ever marry? I guess he’s not thinking with his brain. Now that he has performed surgery on Jenn twice, he’s into her more than ever. She has Nic Nic beat in that department I guess. Giggedy.

Friday’s show was pretty good. Daniel had a touching moment with yet another of his former lovers, Kate, and we got a reminder of their history before she gave him a photo of Parker, making us all wonder if when Chloe returns we’ll learn Parker really is his after all.

Abby tells Maggie her mum’s at the family cabin. “On Smith Island?” Maggie cries. No, on Christmas Island. I snicker each time I hear that. “Days” always did know how to make me giggle.

Miracle.
The treatment is what caused Daniel’s hand tremors to stop, not a miracle. The real miracle is that Jennifer didn’t get an infection from being operated on in an old dusty cabin with a grapefruit knife. Grapefruit knife?

Lack of vets.
The audience is still complaining about the lack of vet use. Most viewers have voiced that they still loathe Gabi for hiring Andrew to fake stalk her and kidnap Melanie and others find Nick creepy and yet the two are front burner. There are so few vets left and they’re not getting what the fans call quality airtime if any at all. Bo is gone so Hope has little to do and oddly, Bo ‘returned’ from California with Caroline and picked up Ciara from school but he hasn’t been mentioned again. Recently, Bryan Datillo approached his fans via Twitter regarding his own lack of time on canvas.

Shot out for Lucas.Let's hear it peeps. I need more air time. Let them hear u.

He’s already getting the milk for free from the cow so what’s he buying with that bracelet?
I miss the Brady who locked Vivian in the sarcophagus. The one with facial hair and a bad attitude. The less facial hair Brady has on his face the more gullible he becomes. If part of Kristen’s scheme includes getting Brady to fall for her shouldn’t she get to know him outside the bedroom for her plan to really get into motion? So far one could argue that he’s starting to become addicted to the sex. Maybe she wants him to become addicted to sex and then drop him and watch him uh... writhe around on the floor naked and dying for a "fix?" Did you just picture that?! Maybe that wouldn't work but if these two left the bed and had a meal together or did some other activity in the neighbouring town, we might think that she’s purposely trying to get him to fall for her as part of whatever scheme she’s cooking and in turn, it'd be easier to believe he has more interest in her than her body. What are your thoughts? Vote: Is Brady falling for Kristen?

John cannot stay away from Kristen, can he? He stole a gift from Brady’s home in order to use it to see her and thank her for not throwing his wife in jail for breaking and entering. Why not just call, text, or email? Bad-ass Brady would have snapped at him for getting into his business.

And of course, we heard this nugget of dialogue again: "Who are you and what have you done with my grandfather," Brady asked Victor. Oy.

Confused.
Chad violated his contractual agreement which means he should be in jail. Why didn’t Justin or Gabi have him thrown in jail? Because he’s a DiMera and will get off or because Gabi too will go to jail for what she did to Melanie? I wish Chad, EJ and Kristen would move into the mansion and have more story together.

Take a look at Matt’s SOF Musings. A taste: "He stared at them so much that, for a moment, it was like he'd had Andrew's hands grafted onto his own by Rolf and they were possessed by the spirit of evil."

Join Soaps.com on Twitter @soapoperafan, "like" Soaps.com on Facebook to dish on "Days of our Lives," all the other soap operas, "Dallas," "Glee," "Grey’s Anatomy," "Pretty Little Liars," "Revenge" and "Vampire Diaries."

Days of our Lives Video: Tremor No...