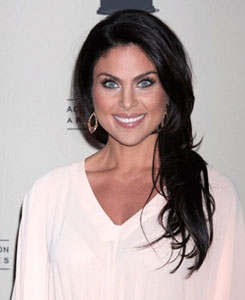 Brady Black has just thrown himself into what could be a tumultuous affair with Kristen, but it isn’t the first time Brady has faced conflict in his relationships.

In 2004, Chloe Lane was in a car accident while away from Salem – and her love Brady. Badly scarred, Chloe was able to convince her mother Nancy to tell everyone in town she had really died in the accident rather than face anyone in her new state.

After learning there was a surgery in Salem that could restore her looks she agreed to return and reveal to Brady that she was really alive. Overjoyed, he proposed before they even knew the outcome of her procedure and while they had some false starts on the way to the altar, they eventually wed on September 16, 2005.

On their wedding day Chloe finally showed off the results of her surgery as she lifted her veil to reveal a perfectly flawless face. Afterwards, Chloe and Brady left Salem for their honeymoon before settling in Vienna, Austria, where she would sing.

Chloe returned to Salem in November of 2007, but without Brady. Despite her constant lies about Brady’s whereabouts, people soon learned they were no longer a couple and Brady was, in fact, missing.

The truth was Brady had become addicted to drugs, turned on to them by Chloe’s friends, so Victor had secretly kidnapped him and sent him to rehab. When Chloe learned the truth she visited Brady in rehab. Instead of a reunion, he served her with divorce papers. Their marriage – Brady’s one and only – ended on May 27, 2008.

What do you think of Brady’s latest relationship? Let us know by sharing your comments below.

Visit Soaps.com’s Flashback In GH History to learn more about yet another dad for Michael, Dr. Tony Jones.

Find out if Cat's father's wedding goes off without a hitch on "Beauty and the Beast" in Soaps.com's Primetime TV Spoilers. Then, catch up on all the weekly Soaps.com blogs in one place at Soap Opera Fan Blog's Soaps Digest Column.

Days of our Lives Video: I Wouldn't...