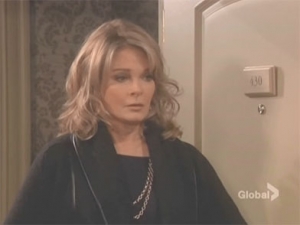 There's an analogy in here. (NBC)

Salemites have been playing hide the salami and then “hide the baby,” for the past four years. Fans have voiced negative opinions about the storyline and about baby focused storylines in general yet the powers that be ignore them and keep repeating history and the fact that it’s written six months in advance doesn’t bode well for changing what doesn’t work.

Brady and Kristen.
I see a desperate and obsessive woman using a hapless, gullible and horny man as her pawn. Even though I love that Kristen’s back, the writers again are missing the big picture. It does not matter who they bring back to any soap opera if the writing isn’t working. There has been a lot of flak from fans because Kristen’s having sex with her former step-son, but incest is practically the norm in Salem. I think Doug had a thing with Addie, Julie’s mother, before he married her, Renee DuMonde and Tony DiMera dated before they learned they were half-siblings, and Stephanie Johnson had a sexual relationship with her Uncle Max Brady and Tanifer are even more related than Kristen and Brady.

Poor Marlena. She walked in on Brady on top of Kristen in bed and didn’t run out screaming, “Oh my eyes,” but instead lingered for long moments at the door, torturing herself. She looked a little woozy and then later it was pretty funny watching her roll her eyes at herself for asking John to get her a glass of water as if that would erase the memory! Since the writers can’t go five minutes without writing a new baby storyline I even thought it was possible Kristen’s plan is to get herself pregnant by Brady in order to ingratiate herself into their lives.

Cheesiest line all week: “It’s a good thing this body doesn’t lie the way you do,” Brady tells Kristen after sex. Ew. Body doesn’t lie? No wonder she didn’t want to go in for a second round. He probably ruined it for her.

A positive amongst the negative.
It was nice to see Marlena being a friend and rising above pettiness about Stefano in order to say kind words to Kate about her divorce. Both these women could use a friend.

Ejami’s boring dialogue.
I’m still finding EJ and Sami’s dialogue and “playful” scenes forced and not remotely amusing or interesting. We had Lumi already so why are the writers trying to make them into what Lumi once was? As Matt pointed out, Lumi had better dialogue. I don’t think the writers actually know how to write for Ejami. Every couple is different and every individual is different when they’re in each relationship with another so why borrow from another couple’s writing? There was more gushy dialogue about what wonderful parents they are but if they really want to show they’re such good parents, they should stop using their kids as props. What would work is seeing their children SORASed so they could cause friction between the two.

“She lied about her baby’s father.”
Sami’s rant about Nicole lost credibility the moment her mouth opened up and the hypocrisy ran rampant. “Do you know what she’s done to me?” It was great to see Eric point out that EJ has done worse and she not only has forgiven him a million times over, but he’s a huge part of her life now. I’m not saying Sami needs to befriend Nicole but at least recognize that there are loads of similarities between the two. I forgot that Eric was so good at calling Sami out.

Annoying baby storyline.
Sami started the trend of hiding the father of her baby, Nicole rode her coattails and Gabi’s the new generation of baby daddy hiding. This is all the "Days" writers have that they think will sustain a 47 year old soap opera. This is worse than the Sydnapping. At least during the Sydnapping none of us really knew who the Sydnapper was for the longest time. Will and Gabi have concerns that telling the truth could make them lose the men they love. I’d like to know how. How? How is that possible and if it is by some off-the-wall chance, then I guess they're better off without them. Why chase after something or someone when it's not for you? Gabi actually things there are "thousands of reasons" they can't raise their child together. Thousands. Such melodrama. I can’t even think of one reason why they can’t raise the kid together and why the heck is being in a relationship with a man more important than raising a child? How do these two boneheads think single parents do it? They're lucky they're best friends. Who better than to share something so precious as a child? Gee, I hear Nicole wants a baby. Maybe adoption really is the way to go.

Nick continues to creep me out by planning out Gabi's life. Matt pointed out that since Marlena thought Nick was better, that it raises some serious questions about how many demented people are running around Salem under her care. We agreed that all in all, if they made Nick more openly anti-gay, and if they gave Sonny more of a personality, it might save this dud of a story.

There have been many poorly written stories on the show this year but this one takes the cake.

Stupid is as stupid does?
John’s getting on my nerves with his blasé attitude about the woman who tried to kill his wife. He refuses to cut himself off from Kristen who isn’t even a friend, in order to save his marriage? It's not believable. John is deeply in love with Marlena, his "soulmate." Perhaps if Kristen was tied to John by a child they had together, they could have gotten closer and warrant a real reason for Marlena to be jealous.

More forgiveness:
Maggie acted surprisingly ungracious when Nicole asked for forgiveness. I wasn't clear if the older woman forgave her or not.

Take a look at Matt’s SOF Musings. A taste: "After listening to Kristen repent her sins at the rectory, Brady followed her back to her place to encourage her to commit some more."

Days of our Lives Video: You Seem...