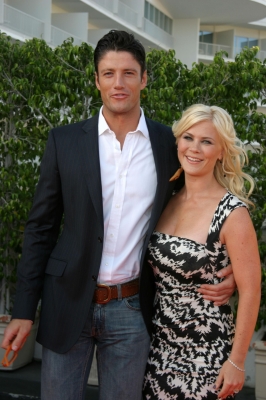 EJ and Sami have had quite a tumultuous past, and as the pair grow closer yet again, it is hard to remember a time before these two were intimate. But at one point there had to be a first kiss. For these two, it was on what was supposed to be her wedding day to Austin.

When race car driver EJ moved to Salem in May 2006, he had a glint in his eye for bad girl neighbor Sami from the moment she went looking for a wrench her boyfriend Austin had lent him earlier. Of course, he also had a Stefano-driven agenda. But the feeling was mutual, they developed a friendship and the two began to spend quite a bit of time together.

In fact, Sami and EJ found themselves in numerous impossibly romantic situations that summer – a hot photo shoot, a tango on the pier – that all led up to the hours before her spur-of-the-moment wedding to Austin, who was himself having an affair with Sami’s sister Carrie at the time.

The night before the wedding, Sami was in need of a place to stay to keep with the tradition of not seeing her groom before the big day, and EJ gladly offered up his bed while he bunked on the couch. Austin was leery, but agreed.

EJ insisted on making Sami’s last night as a single woman special, making her a romantic dinner complete with oysters, wine and lots of chemistry. The next morning when EJ went to wake Sami for her big day, she reached up and pulled him in for a passionate kiss without ever opening her eyes. She was mortified when she realized her mistake, but even more so when it became clear she was going to be late for her own wedding.

Will EJ and Sami try to find happiness with each other again? Let us know by sharing your comments below.

Visit Soaps.com’s Flashback In GH History if you wonder why Edward left Tracy out of the will.

Read about Silver showing off her new burlesque skills and more on "90210" in Soaps.com's Primetime TV Spoilers. Read how The Initiative got closer to Daniel on "Revenge" in Revenge recap: Revelations.

Days of our Lives Video: This Is...

Days of our Lives Video: A Train...