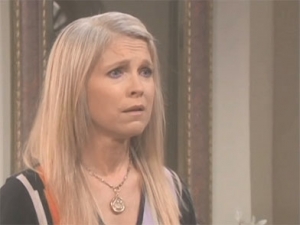 Pawn, real attraction or both? (NBC)

This week showed us that there isn’t a single Salemite left who has ever heard of boundaries, they tend to go spastic when anyone under the age of 30 gets knocked up, they’ve never quite understood the meaning behind “It’s none of your business,” but by the end of the week, they were asking for forgiveness left, right, and center.

Baby on board.
Rafe’s overprotective nature had him riding Will’s ass hard about Gabi’s “abortion.” Will should have just come clean. Why hide it? Nick too came down really hard on Gabi by jumping to conclusions and blurting out accusations. I thought he was going to publicly flog her for a minute and all she could do was stammer while Will grew a set and blurted out the truth. Maybe she thought it’d come between them and didn’t want to ruin a good thing but was the ‘good thing’ ever really that good if she was feeding him lies?

Sami still owes Gabi an apology for going behind her back. “I hope you understand why I had to go to Rafe,” is not an apology. I wish Gabi would have called her on it. Instead, she didn’t even get mildly dismayed upon realizing Sami blabbed to Rafe and Nick. Sami told Rafe out of selfishness in order to “make progress” in their “relationship” and Rafe didn’t even mind that she used his sister. Yeah, the one who he’s always trying to protect? It’s pretty disgusting. That whole clinic scene was just ridiculous. Gabi’s not a teenager and doesn’t need her brother to tell her what to do. For that matter, neither does Sami need Rafe on her ass. Let me rant about that for a while…

The protective vibe is such a turn off.
Though I understand Rafe’s jealousy and concern over learning that EJ is Sami’s boss, he should have reeled it in considering he and Sami are not an item and cavemen are not sexy. She even had to remind him that Gabi’s issues took precedence over theirs yet he still kept nattering. Red flag.

Speaking of the protective type and red flags, Nick’s getting weird. He just wants to belong to a family. Um doesn’t he have one? And really? He’s already trashing the father of Gabi’s child? Couple of red flags this week. Should Gabi marry Nick? Vote.

Unlawfully yours.
I’m torn between being giddy that Marlena’s acting so out-of-character and feeling concerned for her new-found nuttiness. My jaw dropped when Brady coerced Kristen into allowing Marlena to read her private journal, even though it’s likely that Kristen wanted this to happen. They’re nothing but pawns in her game. Still, it was shocking to see such a violation and Marlena of all people participating in it! Good reason not to keep a journal. What if Kristen had naughty videos on her tablet? I love that Kristen actually asked Brady to protect her from Marlena.

Nothing is sacred anymore. Kristen went to confession and Brady eavesdropped on that. Father Tobias seemed to hang on Kristen's every word. It's not every day that a DiMera confesses. It was like watching a soap unfold for him. When he started to list the Ten Commandments, she broke out in hives and sneered! I thought she was going to burst into flames!

Course we all knew for certain that Kristen set the confession up when Brady found her with her door open, weeping ever so softly...

Is it truly over?
Devious versus devious. What a shame to break these two up. I love Kate with Stefano and will miss their banter.

Last nerve.
I swear I already blathered on about how I’d like to see less of Daniel and Jennifer and let’s now add Maggie to that list. All the angst and whining is making my head spin!

Random annoyances:
Does every woman in Salem have to have a child, or a burning desire to have a child? Some women adopt, some are never able to have kids and guess what, some women don't want children at all.

I almost asked if everyone in Salem was required by law to be Roman Catholic until Nicole talked about not having any real faith. I'm not interested in seeing a conversion. Not everyone in the world is one religion and in fact, some have no religion at all. Just looking for a little reality injected into my soaps!

In Soaps.com's interview with Greg Vaughan, the actor says, "It wouldn’t look good on my character if he was already breaking vows and frolicking in the sheets quite yet."

Take a look at Matt’s SOF Musings. A taste: "EmoChad is gone. Now he has the snake in the grass DiMera do."

Days of our Lives Video: It's Him