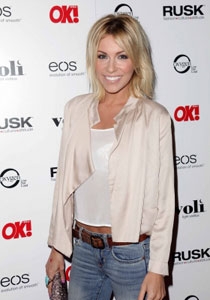 Gabi and Will are currently considering an abortion after learning about their surprise pregnancy, but they are certainly not the first Salemites to struggle with that decision.

Shortly after Rex DiMera and his twin sister Cassie literally landed in Salem during a meteor shower in 2002, he began dating Mimi Lockheart. They had a tumultuous relationship, and it was during a highpoint when Mimi discovered she was pregnant.

She didn’t think they were ready for a baby and decided to have an abortion without telling Rex. It was an incredibly emotional decision for her, made even more so when an infection made her sterile. She kept the whole thing a secret from Rex.

Evil Jan Spears found out the truth and used it as leverage to enlist Mimi’s help keeping Shawn away from Belle. After Belle married Philip, Jan slipped and hit her head while arguing with Mimi and Mimi almost went away for the crime.

Rex ended things with Mimi when he found out the truth after overhearing her and Belle. Mimi blamed Belle when he left town and ended up getting closer to her roommate Shawn, whom she married in 2006.

After in vitro Mimi became pregnant, but miscarried. They decided on surrogacy but EJ as the black-gloved one switched the dishes which caused Mimi’s egg to be fertilized with Philip’s sperm and Belle’s egg with Shawn’s sperm. Mimi and Shawn split up and Phillip and Mimi signed away the rights to their child.

What do you think Gabi will end up doing about her pregnancy? Let us know by sharing your comments below.

Visit Soaps.com’s Flashback In GH History if you are curious as to how Skye became a Quartermaine in Port Charles.

Get insight into everyone’s past on a flashback episode of "Revenge" in Soap Opera Fan Blog's Revenge recap: Lineage. Dropped storylines got you down? Commiserate with Soaps.com’s Top 20 Dropped Storylines compilation.

Days of our Lives Video: A Terrible...