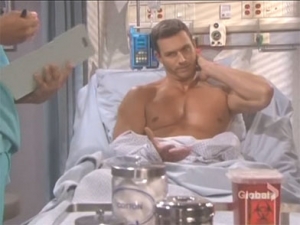 This three day week we spent time watching Will and Gabi make what was quite possibly the fastest decision ever on whether or not to abort their baby, we learned Sami can’t keep a secret and became a little uneasy when the only town shrink started acting like one of her patients.

Days94 sounds off:
Here’s a poster rant from our forums: “Gabby being ashamed of her pregnancy and Will proposing to her is so freaking 1950s that it is ridiculous. It makes her look like a stupid damsel in distress. And Will is so stupid. This storyline makes me sick as a woman who was raised by a single mom. You don’t marry a man because he knocks you up! What are the writers trying to say? Women can’t raise children on their own? This is why men should not write for female audiences.”

Day94 made a few good points. I’ve found Gabi and William to be very mature about it all and though I’m not discounting the shock and concern the two are facing with their decision whether or not to take the pregnancy to term, or abort, considering each comes with its own set of repercussions, it’s still a little behind the times. I still see no problem in telling everyone the truth about Will being the father. Why borrow trouble?

Obsessive much?
Nick is starting to get on my nerves by bringing up Chad to anyone who will listen. Talk about putting Sonny and Will in an uncomfortable position to take sides! Nick needs to deal with his own problems and get Justin involved since Chad’s in breach of his contract.

Family planning.
Gabi and Will discussed their options at length, especially abortion which costs $350 dollars. Gabi wanted to pay cash but only had $90 bucks after paying tuition and Will only had $48 bucks on him. I guess he didn’t save anything from his time working with EJ. Neither had anything in their bank accounts I gather but thankfully Sonny had a few bucks from his register – $150.00 to be exact. Matt wondered, “Why was he asking Sonny for $200 if they need $212? Where would they get the other 12 dollars?” Anyone? Anyone? The whole scene sounded like a math problem Nick could have solved…

Problem:
Gabi is twelve weeks pregnant. Gabi and William want Gabi to get an abortion. Gabi only has 90 bucks and Will has 48 dollars, but the abortion costs $350 dollars. Sonny gives them $150.00. They need get this done today.

a) What angle will Rafe have to cock his fist in order to punch Will into the middle of next week for getting his kid sister pregnant?

b) Can Sami fit enough pennies in her big mouth to make up the difference?

Never let them see ya sweat. Er... too late!
What to say about Marlena... obviously she shouldn’t have deleted the voicemails from Kristen. Not only is it John’s business but it doesn’t help matters and the truth will always come out. I think she should have answered the calls which could have made for better drama rather than the passive aggression. Deidre Hall, her portrayer, told me last Thursday in a Days of our Lives Twitterchat that Marlena’s biggest concern and fear right now was that nobody will believe her about Kristen’s schemes. It’s interesting that this is her biggest concern and not what Kristen will do to her and John.

Do you think John was a little over-the-top with his anger toward his wife?

Some have considered maybe John and Marlena are working together to make it look as though Marlena's going off the deep end in order to catch Kristen in one of her schemes. I like that idea and think anything is possible!

Random... Eileen Davidson (Kristen) participated in another Twitterview last week and told us, "Kristen can have any Black she wants. She thinks." Uh oh!

Random... Did you see chemistry between Nicole and Eric? It feels awfully naughty to even mention this because he's a priest! That book club scene - shouldn't they have been reading Thornbirds instead in relation to Nicole and Eric? Just wondering...

Don’t forget to watch! Friday’s show is a classic episode of John and Kristen’s (Susan) wedding June 24, 1997. It’s a great episode so make sure to set your DVRs.

Take a look at Matt’s SOF Musings. A taste: "Half of the town's adulteresses got together to discuss, "The Scarlet Letter.""

Days of our Lives Video: It's About...