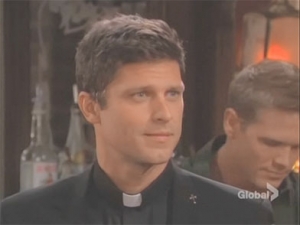 Things picked up in Salem this week. We had an excellent balance between the romance and the drama, a lot of comedy from the unlikeliest of sources, and we learned Sami can suddenly speak Japanese…

Oh John.
After everything Kristen has done to John and Marlena, it’s not easy to believe he would not only forgive Kristen but defend her. Forgiveness will benefit him, but he shouldn’t trust the woman! Then again look at all that EJ has done to Sami and those two have forgiven each other and then some. It’s sort of ironic and interesting though that Kristen can’t get forgiveness for faking a pregnancy after miscarrying John’s baby and stealing John Jr. (EJ) 14 years ago but Nicole did this very same thing to EJ 4 years ago and he and I think most of Salem has forgiven her.

EJ was born 14 years ago which means anything he does we can’t exactly blame him for being that he’s just a teenager. I say this with tongue planted firmly in cheek.

Filler or establishing some form of a relationship?
Abigail shared a random, confusing yet pleasant scene with her family’s number one enemy, EJ DiMera. We know Abigail likes older men who aren’t into her so could this mean something, are TPTB establishing a new friendship or is it simply an exchange we shouldn’t think too much about?

“We’re both pregnant.”
Gabi broke a nail, I mean fainted and had to be rushed to the hospital by Nick, who paced, picked his teeth in a way that only the obsessed can… Sami learned of the nail breaking and immediately placed a call to the Pentagon, I mean Rafe, and then raced to the hospital in the DiMera’s company jet. It was oh so convenient that Sami was there when Gabi learned she was pregnant. Sami didn’t seem to mind though Gabi seems overly concerned her brother will be “disappointed” in her. Another baby storyline… I may be the only one who doesn’t care either way since Gab’s not a child and we all knew Will would take responsibility. So where’s the story? Perhaps Will keeping grief sex with Gabi from Sonny will cause a little strife and Nick might not like a gay man being the father to his girlfriend’s baby. Maybe the story is that she’ll consider an abortion. Either way, it all has a distinctive 80s feel to it. I wasn’t shocked about the pregnancy but it took a minute for it to sink in that Sami’s going to become a grandmother at such a young age. The kicker? The tables are turned. Sami’s the one with the baby secret, not Rafe. That was awkward!

Trouble finds Nicole and Nicole finds trouble.
Nicole not only borrows trouble but trouble follows her like a disease. At least nothing keeps her down for long. She was ready to leave town to be with Taylor until she saw Eric Brady. It may be too early to decide if she is already fantasizing about getting him out of that clerical collar or is just happy someone cares about her aside from Brady and Rafe. Will Nicole go after Eric?

Even though Jennifer Horton is practically a saint, she sure hasn’t behaving as one as of late, which begs the question for many fans, why on earth would she apologize to the woman who accused her of murdering her child and almost sent her to prison? I guess seeing someone hit rock bottom does a lot to change one’s attitude. Now that the move to Hawaii is off, Daniel’s resignation must be null and void. He’s back at the hospital hanging around Jenn. Sometimes watching them together is like being served two pieces of stale dry bread when what you really want is bruschetta. If they want to win over the fans they are going to need to bring that passion back from their days arguing.

Lucas was right!
Maybe I understand more now why Lucas was so fierce in his attempt at breaking down Sonny’s door. Between him and Gabi, it’s surprising the door is still on its hinges. So Lucas was right. Sonny admitted he really did lure Will to his apartment in order to show him his etchings. "There’s going slow and then there’s going S L O W," he says. I thought it was cute. It’s not as if Will was forced into anything. It was a matter of feeling comfortable and having that time alone to do it.

Random thoughts.
I'm enjoying Father Tobias' down to earth and humourous scenes with Kristen, EJ and Kristen's chemistry. Their scenes have a relaxed feel to them as do the ones with nu-Eric, Greg Vaughan. I did find Hope trying on Tom's Pilgrim hat unnecessary and random? Could they be finding it difficult to fit Hope in now that Bo's not around?

Until next week, have a glorious weekend.

Guess what? Patrika Darbo is returning.

Take a look at Matt’s SOF Musings. A taste: "Considering the DiMera penchant for swapping women, Abby could be in with a shot at the man with the superfluous hole in his head."

Dustin’s Thoughts on Days: Regarding Bo and Hope, Dustin says, "It’s 2012, some people are single, and some people have long distance relationships. It would be refreshing to see the show address that."

Days of our Lives Video: Anything...