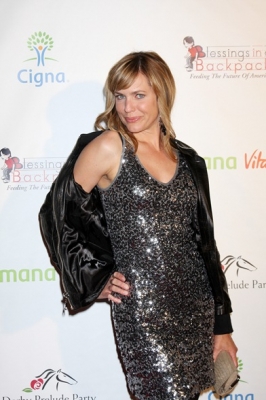 Till death do us part.

Nicole Walker has had a time of it lately, but it seems she always does. Our flashback looks back on an earlier quest for money in her divorce settlement that interrupted her journey to find love after growing up with an abusive father.

In 2008 Nicole was ready to settle a divorce. Unbeknownst to her, the marriage she was running away from with Victor Kiriakis wasn’t legit since she was still married to husband number one, Trent Robbins. She didn’t set out to break any laws and believed her marriage was annulled back when she married Lucas Roberts.

Unfortunately for Nicole, now that she had found out she was still married, Trent’s arrival into Salem left her in a precarious position. Would she be able to maintain that she was only married to Victor alone? She needed to keep Trent silent until her divorce was final with Victor, but that meant opening herself up to abuse by doing Trent’s bidding. Trent was all bad news, with blackmail being the least of his problems. In addition to having Nicole spy on Max while he tried to keep Max away from Melanie, he also was pimping out Melanie to cover gambling debts and wanted $25,000 from Nicole to keep quiet.

Nicole Walker was finally free of Trent Robbins when he was stabbed in the back. There was no amount of help she could get from EJ or anyone else, and even considered killing Trent herself with a gun. However as fate would have it Nick Fallon found Trent arguing with Melanie in the cemetery. After Trent got violent with her and she fell, getting herself knocked out by a gravestone, Nick picked up a knife and stabbed Trent from behind.

Nicole was a suspect for a short time, but the truth eventually came out.

Do you think that Nicole was able to put the past behind her after Trent Robbins became her dearly departed? Share your comments below.

Visit Soaps.com’s Flashback In GH History to relive a moment from Anna Devane’s past in Port Charles.

Catch up on which old characters are visiting Salem again with Father Tobias this month at Soap Opera Fan Blog’s November Days of our Lives Comings And Goings. Find out which two actors are together again on the big screen this Friday through our Celebrity News.

Days of our Lives Video: Nicole's...

Ginny & Georgia Trailer: It's Not Easy Having a Hot Mom in Netflix's Dramedy