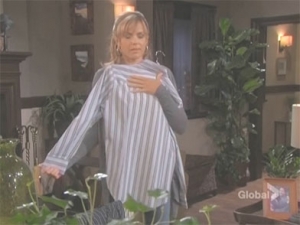 From the Alfred Dunner collection...(NBC)

Congratulations to “Days of our Lives” who made it to their 47th year on the air. I still recall with fondness the first day a friend of mine introduced me to the show in 1994. After watching Marlena float above her bed during her possession, I was hooked. I’d love to hear about your first memory of watching “Days!”

Obsession is trending this week in Salem. At one point the DiMera’s were the only ones who cornered the market on this. Now, in addition to Stefano, EJ and Kristen, Marlena’s preoccupied with Kristen, Nicole’s obsessed with taking revenge on Jenn, Jennifer is fixated on Daniel, and Brady’s consumed with protecting his family from Kristen.

Salemites find God?
We’ve become so accustomed to hearing the people of Salem calling each other “bitch,” “slut” and “opportunistic tramp,” that Wednesday was a big surprise when all sorts of religious and biblical references were flying out of everyone’s mouths instead. With Kristen’s “Judge lest ye be judged,” comment to EJ, Maggie’s parable about the three blind men and an elephant to Brady, and Marlena sarcastically calling Kristen a “churchie,” it felt as though we were in an alternative Salem. Is this in preparation for the priest Eric Brady’s return?

Red flags.
Daniel didn’t trust Nicole enough to ask her if she had a doctor’s appointment the day she lost her baby. Instead, he ran around the hospital from room to room fondling the onesie or twosie or whatever that infernal outfit is and started to put things together. Surprisingly, University Hospital didn’t have a forwarding address, email address or phone number for one of their doctors so Rafe had to contact his ‘guy’. It was nice to see him doing something useful considering he hasn’t had much to do lately. The truth came out and finally, aside from Nicole losing her baby, it made me feel something other than comatose. I felt pity for Nicole even though what she did to Jennifer was inexcusable and unforgivable. Did you feel pity for Nicole? Vote! Dr. Dan said the baby died due to a placental abruption which still doesn’t tell us the exact reason behind it. Oddly, Nicole didn’t have any symptoms. While it was understandable that Abigail would shriek at Nicole about setting her mother up, I wasn’t sure what Jennifer was feeling. Her tears made me wonder if she felt sorry for Nicole, which could go a long way toward her being redeemed in some fans’ eyes. It was a little strange that everyone ran after Nicole and a little odd that they knew exactly where to find her. I guess just Daniel and the rest of the town being there to witness her break-down wasn’t enough drama.

I think the thing I enjoyed most about this story was Nicole dancing with Daniel’s shirt.

Who wants to bet that nobody goes to jail over any of the illegal misdeeds?!

Super fast.
I like that Nick and Gabi are enjoying each other so much sexually but really dislike that their love-making is so obviously being used as a set up for an upcoming storyline involving Gabi and Will. It’s also way too fast for me to believe these two are already in love since they met twenty minutes ago.

Key.
In between the most random flashbacks of her and John, Kristen found her old Milli Vanilli cassette and a key that looks like it could open a door at Hogwarts in a box from the mansion. It was a surprise that it was a key not to a safe deposit box or the Hogwarts Slytherin common room but a key Alice gave her to the Horton cabin on Smith Island. That she used it at all to drink in those old memories of her and John doing it on the bear skin rug is very telling but do you think she’s got people following Jarlena and she really did set this up? I'd forgotten how good she is at manipulating him with just one tear! Loving Kristen!

John’s really acting insanely animated lately. He’s been so much fun to watch. He’s almost over the top with his mannerisms. It’s almost as though all the verbal sparring between him and Kristen has woken something up in him. Could Kristen really have a chance with him?

Have you noticed that they're dressing Marlena a little more matronly? She looks rather frumpy next to sultry Kristen who is dressed to kill.

The "irrational shrew."
Kristen’s been pressing Marlena’s buttons so easily that Marlena has been more rattled than I’ve seen her since the 90s. She forgot her common sense and her training as a psychiatrist was thrown out the window along with her sense of style. Thanks to Kayla, she soon realized she can easily ignore Kristen anytime the woman comes near her or calls her. Of course the problem is Kristen’s counting on this. Marlena doesn’t have that DiMera mentality for scheming so scheme though she will in upcoming scenes, it’s hard to see her besting Kristen at that game.

The University crew.
The scenes with Sonny/Will/Gabi and Audrey seemed more like how high school students would interact rather than University students. I can't really tell if Audrey is rubbing off on Tad. He's such a dork to help WilSon get back on track to impress a girl. Again, very high school... And how long can Gabi lie for Nick?

Picky picky.
Lately people have forgotten their manners in Salem. Maybe they never really had them and I’m just noticing. They’re always barging in on someone’s conversation without ever excusing themselves (Hope?) while others barge into people’s homes uninvited (EJ, Rafe, and Nicole). It's a little off-putting. Even Maggie's been sounding more like Victor than herself. Not good!

Kristen to Roman: "I’d be pretty stupid if I jaywalked don’t you think?" Sure, that’s what all the ex-cons say.

Sami to Jennifer: "Something squirrelly is going on here with Nicole."

John to Kristen: "Of all the cabins in the world, why did you decide to walk into this one?" (Pure cheese.)

And of course our most overused line: Sami, "Who are you and what have you done with my mother?"

Take a look at Matt’s SOF Musings. A taste: "Everyone chased her to the steps of doom. With no novelty cake below, a fall could prove deadly."

Days of our Lives Video: It Is About...