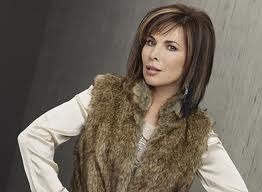 A haunting we will go.

It seems Kate Roberts (Lauren Koslow) has always had a tumultuous relationship of one sort or another. More disturbing is having a husband return from the dead. It has happened more than once in her life. One of the most memorable incidents is when Victor Kiriakis (John Aniston), presumed dead at one point, Victor returned to haunt Kate as a ghost. Pretending to be a ghost is a small crime when you take into consideration the crimes Kate committed against Victor, including bigamy, attempted murder, forging Victor’s will, and blackmail.

Kate and Roman Brady (Josh Taylor) had a second shot at love after Victor gave Kate the boot and once Kate and Roman were finally wed on New Year’s Eve, they had a mere few hours of bliss until the Salem Stalker “killed” Roman during their reception. There was no haunting but the place Roman turned up on – alive was just as spooky and while Roman was being held on Melsawen with all the other Salem Stalker victims, Kate mourned her terrible loss but of course Kate being Kate, this didn’t stop her feud with Roman’s daughter Sami Brady (Ali Sweeney). She was bent on destroying Sami’s relationship with her son Lucas (Bryan Dattilo). Roman, meanwhile, presumed dead, turned up alive with Salem Stalker’s other victims in Salem and after learning of how Kate was treating his daughter, they split.

Though Stefano (Joe Mascolo) didn’t haunt Kate, death once again haunted her relationships and when her estranged husband Stefano DiMera was “murdered” recently by Ian McAllister (Ian Buchanan), Kate was devastated. The man who was thought to be his murderer and who was romancing Kate during Stefano’s “death” was actually holding Stefano prisoner. Once Stefano returned to canvas, he wanted nothing to do with his Katerina. Kate’s simply unlucky in love.

If one thing is for certain, Kate knows how to get even with those that have done her or her loved ones wrong, no matter what the cost. Cross her or her children and she will haunt or harm that person until she is validated. Revenge comes easy to those who think they have nothing to lose.

Check out the flashback in Y&R history when John Abbott passed on.

Days of our Lives Video: Putting On...