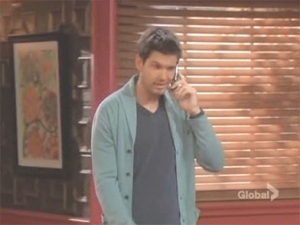 Kristen saved this week from the monotony, Lucas had a few good lines, Nicole ramped up the cheese, and the Halloween countdown begins.

Making “amends.”
Kristen asked to make amends with Marlena but something tells me hell will freeze over before that happens, and do you really believe Kristen’s truly trying to make amends? I bet John will make up with Kristen which will leave Marlena feeling paranoid and angry. That’s how it always works in these situations in soaps. The men are more forgiving (gullible) while the women are smart yet appear to be bitches, thus making a conflict.

Do you think Kristen really did steal Marlena’s phone and drop it at John’s office to make it look as though Marlena is paranoid?

Filler?
Am I missing the point of Kate’s visit to John’s office in order to warn him that his wife’s reputation is on the line if Sami hires Nick “Felon” to work for her? Is Kate desperate? Sami’s job has nothing whatsoever to do with Marlena. At least it didn’t until we learned Kristen was her new boss. Now, I gather Marlena will stick her nose in and implore Sami to quit.

Validation.
How funny was it that Kristen told Sami she was promoted far beyond her capabilities and that the staff made allowances for her sloppy work since she was hired? I’m sending a special thanks to the writers on this one. It’s irritated me since day one that she of all people had such a high powered job, even though I love that she’s working at all. I’d like to see Sami keep working but not in a job that we all know is so unattainable in reality for someone without any education or experience.

No apology.
It’s interesting that neither Nicole, Rafe, nor Daniel apologized to EJ for his loss. I realize EJ has done some appalling things to Rafe but what is the excuse of the other two? And Chad’s condolences left a bad taste in my mouth. “That’s pretty random and brutal.” Matt thinks that pretty much sums up the show right now.

Um and nobody really thought EJ was going to let this baby debacle go did they?! We know EJ better than that!

Ah love.
Teaser alert! With Chloe returning and Peggy McCay spilling the beans in an interview that Caroline screwed up the paternity switch, which would mean Parker really is Daniel’s son, could we see a Danloe pairing again? It seems possible considering Daniel’s throwing himself under the bus so to speak with Nicole for Jennifer’s sake and since the truth will come out soon and we may see Jenn and Daniel together, their happiness can’t last for too long!

Chabigail back on track?
I enjoyed Chad and Abby in the past so if we see a pairing of these two I’ll be fine with it but boy is it awfully fast after Melanie! Then again, who else are these two supposed to date?

Coming around.
Tad seems to be coming around with regards to Will being gay and dating Sonny. I enjoyed their dynamic this week. I’ve no idea why Tad would suddenly come around which is a shame. It’d have been nice to see things more from Tad’s point of view instead of wondering if a punch to the head makes Tad more respectful.

Quick goodbye.
Caroline and Bo left for California so fast, most of their family and friends weren’t notified. Do they even have someone to run the pub? Vote in our poll: Who will run the pub once Caroline’s gone?

Were you satisfied with the way Bo left Salem? I felt it was well done and leaves the door wide open for a return.

Halloween:
The decorations we're seeing around Salem are fantastic and what fun was it watching Sonny and Will being playful with the costumes! In an otherwise dramatic and dreary week, this was a highlight.

Will to Tad: "If you repress all your natural instincts, she may like you!"

Lucas to Sami: "Everything that is old is new again for Sami, once again!"

Lucas, "What standard of perfection are you holding Rafe up to because it sure as hell isn't your own."

Chad to EJ about his dead baby: "That's pretty random and brutal."

Best line of the week:

John: "This mean old bench jump out and get you? You know it happens to me every time. Every time I walk by this bench, I'll just be minding my own business, just walking along and all of a sudden Ahhhhh it just jumps out and gets me."

What I heard: "This mean old bitch jump out and get you? You know it happens to me every time. Every time I walk by this bitch, I'll just be minding my own business, just walking along and all of a sudden Ahhhhh it just jumps out and gets me!"

Find out who died in this week's spooktacular Halloween recap Pretty Little Liars: This is a dark ride.