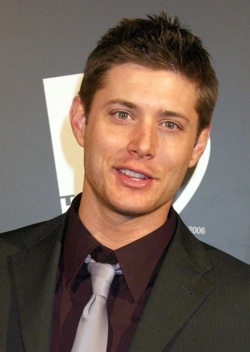 Eric’s past with Nicole.

Greg Vaughan (ex-Lucky, “General Hospital”) will return to Daytime as Marlena (Deidre Hall) and Roman’s (Josh Taylor) recast son Eric Brady in November. Eric has been away from Salem since 2000, so it stands to reason he will return a bit different. Before he does come home, let’s take a look at what his life was like twelve years ago and who might be interested in his reappearance.

In 1998, Eric (then played by Jensen Ackles) met Nicole Walker when he started working as a photographer at Countess Wilhelmina. Nicole was a waitress at the time, but Eric thought she’d make a perfect model. They became involved, but hit a few rough patches when Nicole’s past started to become an issue and Eric’s energy went into supporting his twin sister Sami when she was accused of killing Franco Kelly. Sami was eventually cleared. The final straw was when Nicole married Lucas Roberts, as marriage to someone else is usually a deal breaker.

Eric began seeing Greta Von Amberg, but he couldn’t forget about Nicole. The two rekindled their passion and started to have an affair. Greta realized Eric still loved her and left him. Sometime after, Eric almost died after getting into an accident. Upon recuperating, he decided to move to Colorado in 2000, but told Nicole he would always love her.

How will Nicole react upon seeing him once again? Share your thoughts about Eric’s past and speculate on his future in the comments below.

A big bush crash is coming up on “Hollyoaks.” Get the details in Soaps.com’s Soap Scoop: UK/Australia Edition. Who do you want to see Kristen with? Vote in Soap Opera Fan’s DOOL Poll.

Days of our Lives Video: You Have A Problem

Days of our Lives Video: A Lot To Offer