Test your memory about Robin losing Emma in a blizzard in Soaps.com's General Hospital poll.

Sami and Rafe recently reconciled and are blissfully happy. EJ could destroy it all though with the news that Rafe knew Nicole’s deceased baby was really his. EJ being kept in the dark about a child he sired is a familiar story, one that played out in 2008, when Sami first met Rafe.

After all the drama surrounding Lucas and EJ and the twins they both had a hand in fathering, Sami moved in with EJ for the sake of her children. Soon after, she discovered she was pregnant with EJ’s baby. Again. Wanting to keep her pregnancy a secret from the DiMeras she moved out.

However, she witnessed a murder at the mansion and went into witness protection, where she met her bodyguard named Rafe. They of course grew close as she planned to give her baby to the Convent of the Holy Cross to protect her from the evils of the DiMera clan. Of course, she ended up giving birth at Dr. Baker’s clinic where Nicole switched the babies, which led to a whole other story.

Do you remember whose murder Sami saw landing her in witness protection? Vote and comment on the storyline below. 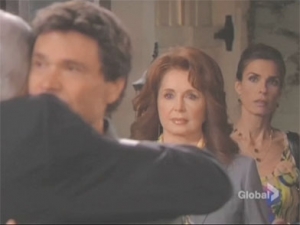