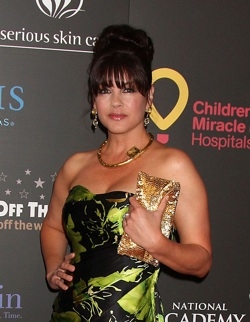 It was confirmed last week that Lisa Rinna is leaving Days of our Lives. It’s not the first time for her character Billie to leave the canvas.

The last time Billie left Salem was in 2008 when Julie Pinson was in the role. During her reign as Ms. Reed, she learned that Chelsea was the daughter she thought died after giving birth in a bayou many years earlier. It was a rocky relationship at the start, as Chelsea wasn’t Billie’s biggest fan. However, the two eventually inched toward a close relationship.

Billie was seeing an amnesiac Steve Johnson at the time. That ended though when Steve regained his memory and reunited with Kayla. Billie grew depressed, got drunk and found some comfort in the arms of the much younger Nick, who was falling in love with Chelsea. After their one night, Nick further pursued Chelsea, who was starting to soften towards him. Unfortunately, Chelsea learned he slept with her mother and cut ties with him and Billie for a while.

Mother and daughter eventually moved past the incident and Billie took a job as the director of security at Salem University. During her time there, she investigated a series of attacks on Chelsea’s sorority sisters. Chelsea confided in her mother that she and her sisters lured the rapist Ford to their house, but he fell down the stairs and died. They tried to keep it a secret, but Billie encouraged the girls to come forward. Victor helped to get the charges against the girls dropped, but unfortunately, Billie was fired. Luckily, Victor offered her a job to head up security at the London Titan offices.

In 2008, Billie left Salem to go overseas. How will she make her exit this time? Share your theories below.

Relive Maxie’s jealousy over Winifred in Soaps.com’s Flashback in GH History. Check out the new Days of our Lives banner of Dr. Dan on Soap Opera Fan.

Days of our Lives Video: Out Of...

DOOL Poll: What Would You Do With EJ...