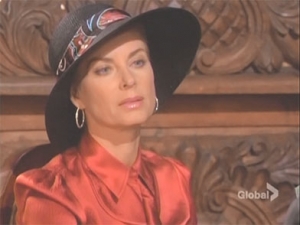 What is going on in Salem this week? Everyone’s getting into everyone else’s business, Brady’s still a go-between, Marlena’s still delegated to being the dispenser of advice to anyone who will listen, and Jennifer of all people bullied a pregnant woman.

Caroline.
Bo hasn’t stepped on a sailboat since the 90s and I’m not sure he will be doing so anytime soon now that we’re one step closer to an Alzheimer’s diagnosis for poor Caroline. I must say, Peggy’s acting was fabulously spot on. It’s good to see her shine again. The storyline is progressing so fast and is pretty heartbreaking. Check out what the actress said about her storyline in our interview with Peggy McCay.

Whose side is Sami on?
Sami offered to help keep Nicole’s child from EJ but considering that she hid Grace from EJ and apologized for it profusely and has told EJ and the entire world that he wins the award for Father Of The Year, I’m curious as to why she’d agree to hide Nicole’s baby for Rafe. Out of love for him? I actually wondered momentarily if she was getting close to Rafe in order to help EJ find out if Nicole’s baby is really his, mostly because she suggested that she could get close to EJ to bring back information to Rafe.

Winning.
It’s difficult to root for Sami and Rafe right now when there’s such a great secret hanging over them. Not to mention they were rather immature to gloat to EJ about him “losing” and Rafe “winning” Sami, too. Their reunion shouldn’t be about winning or losing or about EJ. Could EJ be right? Is Sami with Rafe because he’s the safer choice?

“Moving on to better things.”
I like how EJ said he moved into the apartment across from Sami in order to be closer to the kids with whom he never sees and now he’s moving out and ‘on to better things’. Whatever. He hasn’t given up on Samanther and we all knew he moved in to get away from Stefano and be closer to her, not the kids. I don’t think EJ knows how easy to read he is!

Kate got shot down.
Kate forgets how smart Nick is. She really should find some other hobby than plotting to take Sami down or at least do it with hard work, instead of all these stupid schemes. If she spent more time getting her own sales up, she might actually not have to worry about the competition.

The other triangle.
I’ve been remiss when it comes to discussing the Nicole/Daniel and Jenn triangle. Though I liked the one scene of Danny-boy and the Creampuff arguing, which showed me they still love one another and actually made me care – though briefly, it’s too difficult to get into the rest of this story especially because of the predictability of it all. We can see the reason Jenn is acting out of character is to further the storyline. At least they set it up as the grieving widow slowly turning her grief into bitterness in advance, and the actress is doing really well with the material but it’s really hard to relate to. It’s long since crossed the boundary between helping a friend and stalking. I have a feeling she’ll calm right down once the storyline progresses a little after this arrest. Um because as I said, at that point the storyline won’t need her to be cray cray anymore and we’ll be expected to hate the ‘Cheap Hateful Tramp’ for putting the ‘Creampuff’ in jail.

Why do you think Jenn’s been so disturbed as of late? Vote - Has Jennifer lost her marbles?

Since we know there are cameras all over the square, I can't see it being a long time before everyone learns Jenn really didn't mean to push Nicole.

Kristen's return.
It was good to finally see Stefano return and Kristen's return was interesting. The wardrobe was pretty funny. A throwback to the 80s. She refused to go back to Salem to help repair their family dynamics and it's no surprise considering what happened 14 years ago, but will she discuss being held as part of the harem girl for "The Supreme Leader?"

Nicole to Jenn: "What do you mean you forbid it? Did you swallow a Victorian novel?"

Jenn on how she'll handle Nicole: "With the candlestick in the conservatory!"

Billie to Nicole: "Do your Lamaze breathing!"

Kristen, "I don't really care about Brad and the other one..."

Take a look at Matt’s SOF Musings. A taste: "Pretty soon, she'd be using slang from the 80s, dressing everything in pink and purple, telling children that rape is romantic, shoving people down stairways, swapping babies and conducting lengthy, repetitive conversations while staring awkwardly at people's distracting hair."

Days of our Lives Video: It's Going...