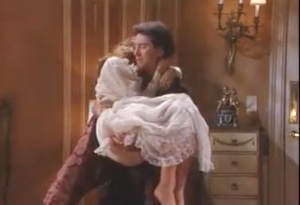 John’s ex Kristin Blake may be on her way back and Marlena Evans may be the love of his life, but in 1989, while Marlena was presumed dead, he met another great love Isabella Toscano. Actually, she was a Kiriakis, as Victor was her father.

When Isabella was introduced, she had just escaped from a mental institution and accidentally killed her sister who had been keeping her locked up. She apparently blocked out the memory, as she teamed up with John, who was still Roman Brady at the time, to clear Kayla of the murder.

Roman and Isabella fell in love, but then Marlena returned. She couldn’t fight the force that was Roman and Marlena’s love, so she had to step down as the woman in Roman’s life. However, Roman learned he was not the real Roman Brady, but John Black. Marlena reunited with the real Roman, as John and Isabella reconnected.

In 1992, John and Isabella got married and welcomed their son Brady Black into the world. They enjoyed a honeymoon in Italy, but then learned Isabella had pancreatic cancer. As her health deteriorated, John took Isabella back to Italy, where she died in his arms.

Days of our Lives Video: Not On...