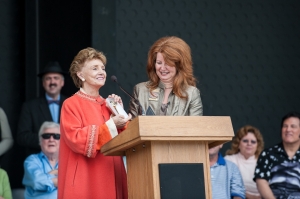 “What counts is the love and the care of a family. And certainly the Brady family is written with a great deal of that.”

After more than 60 years on daytime, Days of our Lives actress Peggy McCay (Caroline Brady) has more than just a few babysitting tricks up her sleeve. Soaps.com spoke with McCay about her earliest memories being on the soaps, her powerful new Alzheimer’s storyline, and earning the key to the city of Mount Airy, North Carolina. She even raps.

Soaps.com: We have been seeing Caroline having some memory issues. Can you tell us about that?

McCay: Well, she has been diagnosed with early stages of Alzheimer’s which is a very serious disease and a progressive disease. There are some answers but not definitively so. So when they presented this to me as a storyline, knowing an actor’s inner ego, they assured me “You’ll be with us.” It’s like the actor joking, “I’ve got a headache, how bad is this headache going to be?” So they have reassured me and I must say, the way they have handled the storyline, I have wonderful scenes with Peter [Reckell]. They give my character a sense of humor about this deadly disease, which is very brave and very reassuring to people in the audience who know the reality of this in their own lives. And it is a wonderful approach from the writers and I am so grateful to them for that. She had a moment which is terribly funny when her daughter Kayla said, “Mom, this is fine and you are doing fine and there is nothing to worry about.” And I walked away and said, “Worry about what?” And I looked at her and said, “That’s a joke, that’s a joke!” With Bradys, I don’t know whether that is a characteristic of Irish, but I know in my own family, some of them came from coal mines and there were terrible accidents and they never complained. They joked. It is a quality, really trying to find the humor in life, even with the bad things that happen. And I am so appreciative that is how they are writing it. It is wonderful.

More: Photo gallery of Peggy McCay as Caroline throughout the years

Soaps.com: Has anyone close to you ever been affected by Alzheimer’s?

McCay: Well, I had a cousin on my father’s side who had a severe case. Luckily, I come from people of loving families and they care for the person. There is something in the fact that sometimes even the person who is not so aware of how bad it is going, so maybe that is a mercy. What counts is the love and the care of a family. And certainly the Brady family is written with a great deal of that. That is a good thing.

Soaps.com: Was there any apprehension in taking on this kind of topic?

McCay: Well, I read a great deal about it, and there is hope for this disease. It is not necessarily a death sentence. And also there are important ways people can prevent getting into this by using their minds and not just dropping out because of being older or whatever the circumstances are. And they will probably put some of that in this too. I take it on as a wonderful acting challenge and I am glad that I have the important storyline I have.

McCay: That’s in my rap song! The line that deals with that is “I am Caroline Brady and I live in Salem, where life is really raucous. I’ve been married to Shawn and have four kids but I love Victor Kiriakis. He is the love of my life, the father of Bo and our passion I’m always admitting. But do I get romance or a sensuous dance? No, I am too busy babysitting.”

Soaps.com: Did you write that rap yourself? That was awesome.

McCay: Yes. I did. It is good to do that kind of thing.

Soaps.com: You have been on daytime since Love of Life in 1951. What have you loved the most about the business?

McCay: I was extraordinarily young when I got my first daytime contract. And I didn’t really know what a soap opera was because I didn’t listen to them and had no idea the nature of them. And it was live, which was another incredible thing. Live! We had an actor who was a radio actor and he was supposed to pick up a phone and he never picked up the phone because he was a radio actor. You have all kinds of crazy things happen with live television. I am writing a book which includes some of the hilarious stuff of live television. I did that for a short time and then I left because I had a dear friend, Marcel Marceau, and he said you must do Chekhov (Uncle Vanya), and I was young and of course everything Marcel said was absolutely important. So I quit a very well paying job to go off-Broadway for $35 a week. But I was awarded with the off-Broadway award of the year for the best young actress. So that was a sign to me that I was doing the right thing. I was following my dream. And I was on General Hospital for a while, and The Young Marrieds and Love of Life and now this wonderful role on Days. It’s great.

Soaps.com: What have been some of Caroline’s more interesting moments?

McCay: Well I think when I came on this conflict between a woman whose passion really was Victor Kiriakis and she kept it to herself that they had a child together. And the turmoil from that and the attraction to this man was overpowering, it was a wonderful storyline. I even tried to shoot him once believe it or not but I am such bad aim I didn’t succeed. That was very exciting and how I started the show and as time has gone by, I am glad I am involved in an important way right now. It makes me very happy to be doing good scenes. I love to act. That is the love of my life, acting.

Soasp.com: We know you do a lot of work with animal charities. Why is that so important to you?

McCay: Well, I always loved animals and I was not aware of the cruelty in handling animals for medical research. I had this silly idea that because I loved animals, everybody did. And the shock of when I first found out – I did a movie for television with Meredith Baxter-Birney and we were on the campus for UCLA and there was a biological research building near where we shot. And there were dogs in outdoor kennels. On my lunch break I went over to say hello to the dogs and they made this coughing noise. I asked a man standing there why the dogs were like that and he said, “We don’t want people to hear their screams.” And I overnight became a radical activist. I called friends and asked what was the most radical group in Los Angeles and they said Last Chance for Animals. They picket, they go in, they take photographs. And I said that is for me. And the next demonstration I was out in the front.

Soaps.com: We understand you just received the key to Mount Airy, North Carolina, during the Mayberry Days Proclamation. Tell us about that experience?

McCay: It was amazing, a great trip. These people love the show and they love me. There is one episode (The Andy Griffith Show) where I was his high school sweetheart, and they just love it. It is amazing to see all these people gathered. It makes it so real. And they gave me the key to the city which is an amazing feeling.