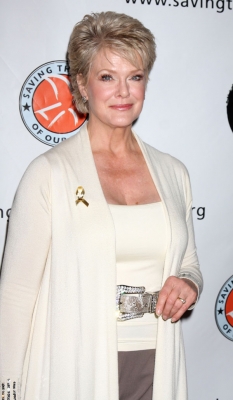 “I am bigger than any challenge that comes into my life.”

Gloria Loring (ex-Liz Chandler) continues her interview with Soaps.com, sharing her feelings about her sister Peggy who died earlier this year of cancer, as well as what she thinks would be a great way to welcome Liz back to Salem.

Soaps.com: I saw you dedicated this book to your sister Peggy. Was she a big support throughout this process before she died?

Loring: My sister didn’t really know much about it and in fact never got to read it. She passed away about five months ago. But she was a shining example of being willing to have the courage to face everything life asked of her. When she got cancer she decided that she was going to change her life immediately. For five years she was trying to leave the agency she was president of and spend more time with her children, spend more time with spiritual pursuits. She just needed time. She had been working since she was 13 years old. She was always trying to be everything for everybody else. For five years she had been telling me she had to get out of the agency but every time she tried to leave they needed her so much. The day she found out she had cancer she said, “That’s it, I’ve had enough. I have to have time to heal.” And there is a difference between healing and curing. She was never able to cure her cancer but she healed so many things for herself and by the time she left she was so at peace. She had gathered all the parts of herself together and she was one whole person. And she was a mentor and a shining example to everyone around her. She was a light to everyone. She used those 3 1/2 years to such great advantage to her own heart, for her won spirit, for her family. And the fact she left at peace with herself is the greatest gift she could have given us. And she did exactly that. She and I would talk about this. We put all the principles in the book to work because she and I were great confidantes. I quote her in the book when she asked, “Why do bad things happen?” She wanted to know because coincidence can bring all of this goodness into our life. And I don’t know why. We can spend a lifetime asking why. A better question to ask is, “What is this asking of me?” And Peggy always would look to when it got really though, when she was in a terrible state of pain or anxiety and she would call me and I would talk her through it and she would be calm again. And so we were mentors for each other. Peggy is my baby sister and I was already old enough to feel that when she came home from the hospital she was my baby. Our family had been fractured. Peggy was only 3 when our family broke up. We had some contact but by the time she was 5 or 6 I was out of the house and on the road working. I was quite a bit older than her.

Soaps.com: Your other books were all about diabetes, so this type of book is a big departure for you.

Loring: I think that is another reason it took me so long to finish it! I had trepidation. I had to feel so certain within myself that I knew what I was talking about and felt what I was talking about that I was deeply invested in it. I thought why would people take me seriously on this subject but I realized when our heart and our conviction is firmly behind something, people will listen. Because we have our convictions and they will feel that from us. They feel it is our truth. Whether they agree with it or not is up to them. But they will listen out of feeling the passion and the certainty that we feel about it. And it took me all these years.

Soaps.com: What do you want people to take away from this book?

Loring: I hope they get from my stories - because the stories are quite mysterious and quite extraordinary - and from the teachings and writings that I share, and from my own experience, I hope they start to watch for the goodness in their life. And when difficult challenges come, perhaps they can remember in that moment what this is asking of them. Is it asking forgiveness? Is it asking for compassion? These are all great qualities. Great challenges are going to come into our lives. We are going to have to say goodbye to people that we love. We are going to lose jobs and houses - whatever. Things come and go but if we have a bigger version of our life, that life is a journey and we have a depth of perception that I am bigger than any challenge that comes into my life. And at all times I have access to a source of goodness and coincidence and intuition. There is something bigger than just me guiding me that I have access to, that I have available to me. That I am not alone in this universe. That I have inner access to resources so much greater than the individual being.

Soaps.com: So are you working on another book already?

Loring: I do have notes for a book called "Lessons From A Soap Opera: How To Drop The Drama." It is based off a keynote address that I give and I have quite a number of pages and have that charted out and probably once we get this book well on its feet I will start to work on that. Because this is information and wisdom I have gleaned over the last twenty-some years or study and experience. I am a certified yoga instructor and I taught consistently for seven years, but I have been studying ancient principals that are still known to be true today about how the mind works and what we can do to make our lives more peaceful and more stable. This is something I know very well because I put it to use. I speak from my experience and I know these strategies and tools work. So I think that will probably be the next project I embark on.

Soaps.com: Would you ever consider returning to Daytime?

Loring: I did have a meeting with them a little over a year ago. They are going through a tough time, but I did present a storyline idea to them that apparently the writers liked, but who knows. Liz doesn't need to come back forever and ever. She could come back to Salem with her daughter Noelle, who now would be 27 or 28 years old. And she could maybe even have a child of her own and come back a divorced young woman with a child which adds a complication for any romantic relationship. She has some relationship to Salem but she is not a blood relative. So it could be a very interesting storyline and I could come back for two or three months and get Noelle settled and then pop in every now and then. I think it would be great and the fans would love it. They wouldn't need to worry about big, heavy storylines for Liz. I would enjoy it, pop in, get my daughter settled, maybe get embroiled in something or other for a couple of weeks and then go off to sing. That is up to them. They have so many pressures on them and I certainly respect whether they decide to do it or not to.

Read the first part of Soaps.com's Interview with Gloria Loring. Which co-host from "The View" will be in an upcoming episode of "666 Park Avenue?" Find out in Soaps.com's Primetime Dish.

Days of our Lives Video: The Right...

Days of our Lives Welcomes Back...